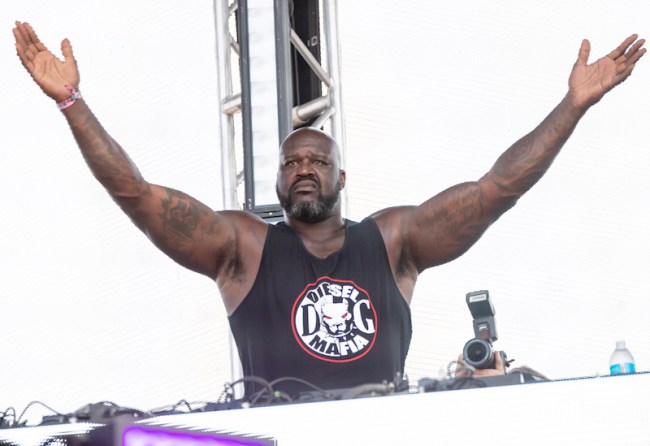 Shaquille O’Neal is, arguably, the most dominant player in NBA history, blending a lethal combination of size, power, strength and agility into a frame that shouldn’t be able to display all those attributes at once. Those skills obviously led to Shaq winning four NBA titles, a league MVP, breaking hoops, scaring the f*ck out of opponents and, basically, doing whatever the hell he wanted to out on the basketball court.

Given Shaquille O’Neal’s dominance on the hardwood, the one team he really made a name for himself with, the Los Angeles Lakers, are paying homage to his on-court supremacy, giving O’Neal the ultimate sign of respect by shouting him out on the Lakers’ city uniforms this season. As tweeted by ESPN’s Dave McMenamin, the Lakers added a vertical lining down the side of the jerseys with the letters “MDE,” which stands for “Most Dominant Ever.” Take a look below at the design.

The “City Edition” uniforms for the Lakers this season are inspired by Shaquille O’Neal – the M.D.E. on the white vertical piping stands for “Most Dominant Ever” https://t.co/I5B1JGFfKQ

That’s a pretty awesome shout-out, especially when considering Shaquille O’Neal not only helped lead the Lakers to three championships during his tenure with the iconic franchise, but also because, unlike other big men before him or since, Shaq was nearly unstoppable on both ends of the floor. He truly was one-of-a-kind, so being called the “most dominant ever” seems appropriate.

While the unique design is a dope tribute to Shaq, the jerseys themselves left many Lakers fans more than unsatisfied, with a few on Twitter taking shots at the script — which is reversed from the normal purple with white shadow on home yellows. Take a look at what some people on social media had to say.

Love Shaq but not really feeling this.

Was hoping for this: pic.twitter.com/gQom0ZtbZJ

Well, unlike Shaq, these are absolutely atrocious, and the Lakers should let whoever designed this walk.

So these are real 😓🤮

Although the Lakers’ city uniforms may have fallen short in overall design, and don’t have the approval of some fans, the fact that Shaquille O’Neal got respect with the lining down the side is a definite win. It’s unique AF, and something that most NBA players will never get the opportunity to have.