Shaquille O’Neal Shoots His Shot With ‘Daily Pop’ Guest Host Rocsi Diaz: ‘Once You Go Shaq, You Never Go Back’ 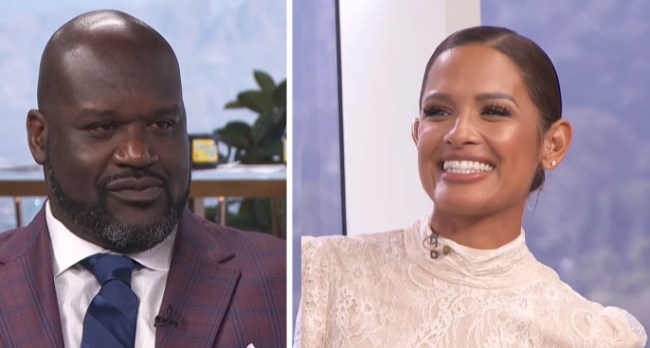 As we are all well aware when it comes to NBA players, shooters are gonna shoot.

Now, no one is mistaking The Big Aristotle Shaquille O’Neal for a shooter. But! He did have a very impressive 58.2% field goal percentage in his Hall of Fame career. So don’t ever count the Diesel out.

Especially when he’s shooting his shot at a lady he’s got his eye on.

While O’Neal was on the show to talk about his partnership with JCPenney to create aline of suits for big & tall men, The Big Flirter was asked by host Carissa Culiner to show them some looks like flirty, happy, and sad and pouty.

It was that last one that Shaq took as an opening, telling guest host Rocsi Diaz, “I could never be sad and pouty with you sitting there.”

“She’s always in my DMs, I just want to let you know,” he added.

“Oh my God, let’s tell the truth,” Diaz said with a laugh.

“I can’t tell you what she says,” replied Shaq.

“You know what she says?” he continued. “She says even though I’m Spanish you know I like that chocolate. And I tell her once you go Shaq you never go back.”

Diaz then tried to defend herself by saying what she really DM’d, which Shaq denied and told Diaz, “You owe me a date for that.”

Then when asked what the first thing he does when he wakes up, Shaq really went after it. (You just have to watch.)

The only question now that Shaq has very publicly took his shot is, did he score?

Can’t really blame him… she’s somehow got access to Popeyes.