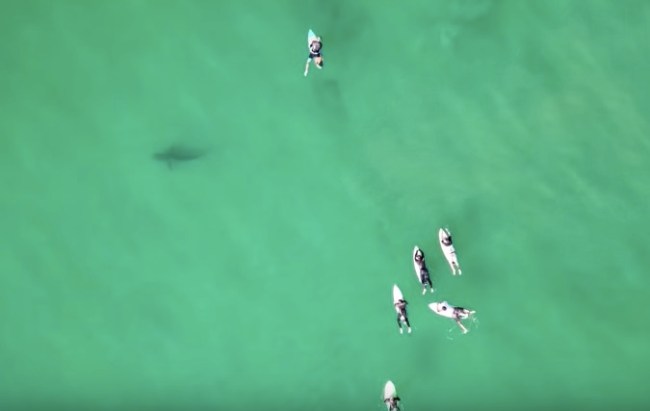 Let me start out by saying that the chances of getting attacked by a shark are extremely slim. On average, there are only about 16 shark attacks per year in the USA (330 million+ citizens) and there’s typically only one fatality every two years. But just because a shark attack is rare it doesn’t mean your mind won’t freak you out every time you go swimming in the dark water.

When I was a kid growing up in Florida I never saw sharks at the beach when my mom would wake me up before sunrise to go snorkeling. I wouldn’t see them out fishing on the boat. It wasn’t until I was 11 or 12 and went parasailing in Sanibel Island when I realized just how fucking many sharks there are in the water at any given time. While hovering over the water behind the parasailing boat I saw a school of about 1,000 black tip reef sharks and we went over multiple sharks bigger than 7-feet. Then as I got older and started paying attention more I realized how many bull sharks and hammerheads showed up this time of year for tarpon fishing season.

My healthy respect and fear of sharks haven’t changed from when I was a kid to now, but if I could go back to not knowing how many sharks are out there I probably would. Like I said in the headline, sometimes ignorance is bliss.

That clip above was filmed just south of Durban, Mommsen in South Africa and it shows several minutes of sharks circling the surfers and the surfers either not caring or not realizing they’re there at all. (h/t adventure sports network)