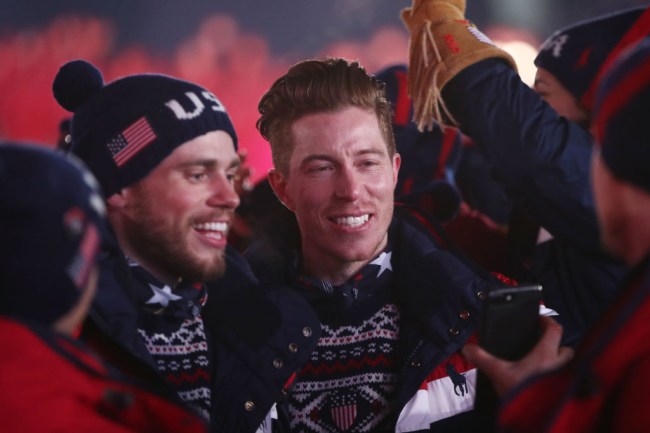 Shaun White is one of those rare athletes at the Winter Olympics who is also a bonafide celebrity. He’s the most successful snowboarder in history, winning X Games medals and Olympic medals for as long as the competitions have been around. Shaun White has the first perfect score in Olympics snowboarding and he’s back this year (with short hair) to try and win gold again.

I point out the fact that Shaun White’s a celebrity because while there are thousands of athletes in Pyeongchang right now for the Winter Olympics the reception for athletes like Lindsey Vonn and Shaun White is just a little different. He can’t go anywhere without being recognized by fans looking for autographs or media trying to swarm him for pics and interviews. He’s also treated well in the restaurants.

Case in point, chef Cha Gwen Sol put ‘The Flying Tomato Burger’ on his menu for a whopping $920 USD (1 million won in the South Korean currency). He put this burger on the menu as a gimmick with the catch that only Shaun White could order the burger. Chef Cha Gwen Sol isn’t just a chef, he’s also a snowboarding instructor. So the chance to meet Shaun White by reeling him into the restaurant was a once in a lifetime opportunity, and it worked. The chef lost his mind when Shaun came in “Is it real? This is Shaun White? It is not a dream? Shaun White tells me it is real. Oh my God, unbelievable (via)”

Shaun White showed up at his restaurant to order the $920 burger (which the restaurant comped for free). The Flying Tomato Burger consists of ‘made up of two patties, two types of cheese and two chicken wings’ according to Reuters.

Shaun’s coach, JJ Thomas, uploaded that video above to his Instagram page showing Shaun White eating The Flying Tomato burger. If that embed isn’t working for you then you can access it direct on Twitter.