Sports World Reacts To Simone Biles, Dozens Of Other Women Seeking $1 Billion From The FBI For Negligence 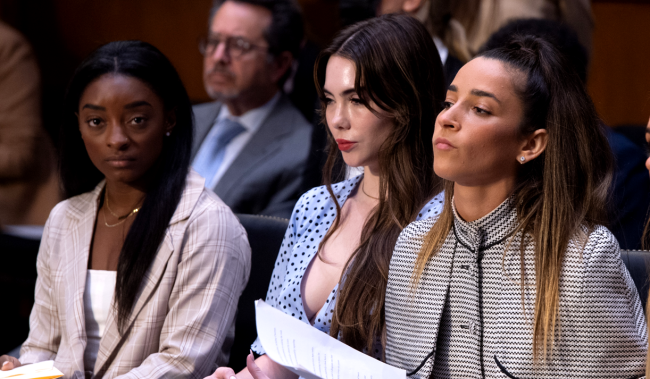 The women are filing their claim on the grounds that the FBI failed to immediately stop convicted serial pedophile Larry Nassar after learning of his behavior in 2015.

Nassar would not be indicted until November 22, 2016, eventually pleading guilty to seven counts of first-degree criminal sexual conduct with minors under the age of sixteen on November 22, 2017.

“If the FBI had simply done its job, Nassar would have been stopped before he ever had the chance to abuse hundreds of girls, including me,” said former Michigan gymnast Samantha Roy about the women’s claim.

“The FBI knew that Larry Nassar was a danger to children when his abuse of me was first reported in September of 2015,” said Maggie Nichols, an eight-time national champion gymnast at Oklahoma. “For 421 days they worked with USA Gymnastics and USOPC to hide this information from the public and allowed Nassar to continue molesting young women and girls. It is time for the FBI to be held accountable.”

McKayla Maroney said about the claim, “My fellow survivors and I were betrayed by every institution that was supposed to protect us — the US Olympic Committee, USA Gymnastics, the FBI and now the Department of Justice.

“I had some hope that they would keep their word and hold the FBI accountable after we poured out our hearts to the US Senate Judiciary Committee and begged for justice. It is clear that the only path to justice and healing is through the legal process.”

Under federal law, the FBI has six months to respond.

However, in September of 2021, FBI Director Christopher Wray admitted to a Senate hearing that the agency had failed.

“I’m especially sorry that there were people at the FBI who had their own chance to stop this monster back in 2015 and failed. And that’s inexcusable,” said Wray.

Wray added that he was committed to “make damn sure everybody at the FBI remembers what happened” in the Nassar case.

Reactions to this news elicited a wide variety of responses on the internet.

Even if they win it all, how are they going to punish the FBI?
Ask that it comes out of their retirement fund?

One of the frustrating parts to this (outside of the obvious) is the American tax payer has no choice but to fund these operations via taxation, while having no say in how these departments are run. What changes will be made to prevent this from happening again in the future?

idk about this. what's the intent? what does taking money from taxpayers do?

It’s not about the money. It’s about getting the answers they need. Through trial discovery and under oath saying why this was mishandled. Accountability to the FBI so that these mistakes never happen again.

Considering how many children there were just by this, I hope they win. Still won't cure their PTSD but it'll help.