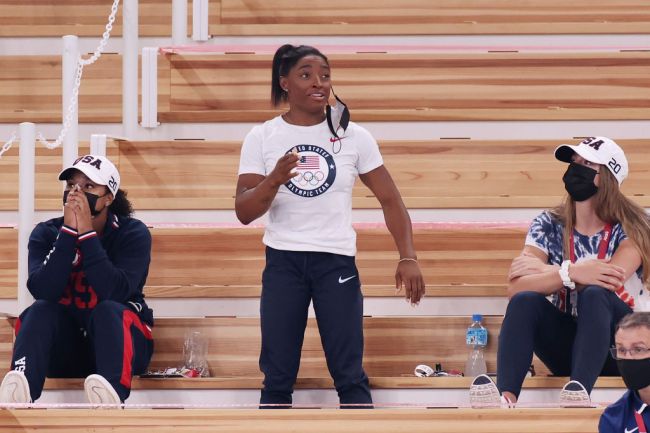 United States gymnast Simone Biles decided to withdrawal from competition and has been the talk of the Tokyo 2020 Olympics. The 24-year-old has been struggling with mental health and a gymnastics-specific form of the ‘yips’ called ‘the twisties.’

USA Gymnastics applauded the decision to focus on herself, Michael Phelps offered a humbling perspective, and McKayla Maroney provided some context into the mental block. Biles only recently elected to participate in her final event, the beam, before the Games close.

Prior to Biles’ decision to withdrawal, she was featured on her teammate Jordan Chiles’ TikTok absolutely slaying the ‘Smeeze Challenge.’ The rest of the men’s and women’s teams also showed off their best dances, but they came nowhere close to Biles’ smeeze.

smeeze challenge 😂😂😂 who did it the best

For those unfamiliar, the ‘Smeeze Challenge’ is a viral TikTok trend at the moment. The Smeeze dance was actually created back in 2009, but it has recently reignited across the internet to Soulja Boy’s song ‘Rick & Morty.’

There are two parts to the dance: the bounce and the upper body.

For the bounce, you hop on one foot while the other continues to stomp. Meanwhile, you move back and forth from left to right.

For the upper body movements, there are a few variations. You can swing your arms up and down, pantomime a drumming motion, rotate your arm in circles like a conga line, or shimmy your shoulders.

Biles, who out-shined everyone with the dance, brought a combination of all of the arm movements. Her smeeze is off of the charts and she should incorporate the dance into her beam routine!