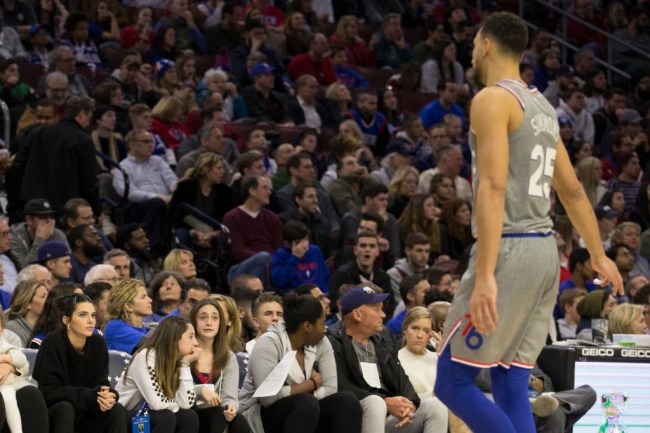 As is almost always the case when a male athlete has a high profile girlfriend and his team loses, fans of the Philadelphia 76ers are following suit and blaming said athlete’s girlfriend for their team’s woes.

Speaking of Tristan Thompson and the Cavaliers, Ben Simmons and his Sixers played the Cavs at the Wells Fargo Center in Philly over the weekend, with Kendall Jenner, Simmons’ girlfriend, sitting courtside.

On the positive side for Sixers fans, Jenner was caught booing her sister Khloe’s boyfriend during the game. Solid move.

Annnd that was all it took. One game.

Now there is a Change.org petition online to ban Jenner from all of the 76ers games at Wells Fargo Center.

It has come to the attention of Sixers fans that Ben Simmons has rekindled his relations with Kendall Jenner, a member of the notorious, career killing Kardashian/Jenner family. Jenner was front and center in attendance for the Sixers loss to the worst team in the league, the Cleveland Cavaliers. Better known as the Island of Misfits toys Lebron left behind. We as Sixers fans cannot sit idly by and let Kendall Jenner ruin what could be a truly special Sixers season by her attendance at Sixers games. We must take action. We must see that the Sixers and the Wells Fargo Center ban Jenner.

It is not a coincidence that the Sixers, who had started the season 10-0 at home, lost their first home game of the year the first time Jenner shows up. To make matters worse, the Cavaliers were winless on the road heading into their Black Friday matchup with the Sixers. It was inexplicable and Jenner’s detrimental behavior is clearly to blame. To make matters even worse than worse, Jimmy Butler left this embarrassing showing with an apparent knee injury. At this point, Jenner is not only damaging the future of this franchise but the livelihood of innocent men as well. It is disgusting behavior on her part.

If the Jenner/Kardashian family has any shred of decency left, Kendall will never again show her face at the Wells Fargo Center. The absence of Jenner, would return the home court advantage the Sixers have garnered since March of last year. A 20 game home regular season win streak has been snapped, Ben Simmons’ career is in jeopardy, and an innocent man in Jimmy Butler is injured. The madness must stop. BAN KENDALL JENNER FROM THE WELLS FARGO CENTER.

Have to love how they blame Jenner for Jimmy Butler suffering an ankle injury during the game. Very rational.