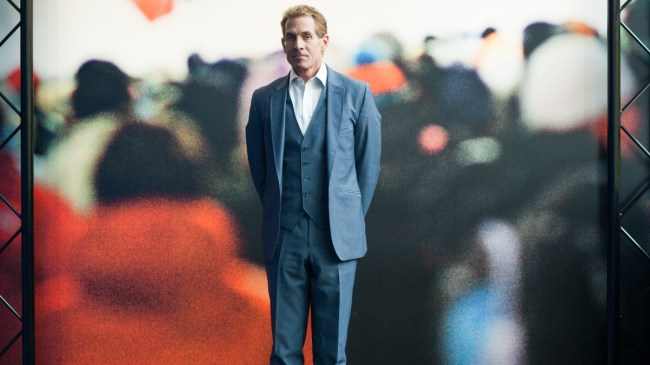 Skip Bayless is a well-known Dallas Cowboys fan as he talks about them all the time on Undisputed with Shannon Sharpe.

After the playoff loss, he shared a very clearly fake video of himself throwing a temper tantrum. The weirdness of it all is leading to many roasting the tv sports analyst.

Soon after the game concluded, Bayless shared this video on social media. You see him walk from around the corner holding a Dak Prescott jersey in hand. Then he wads it up and throws it into the tiniest trash can we’ve ever seen. Watch the cringe-fest for yourself.

I’m sorry. That’s it. I’ve had it with Dak.pic.twitter.com/1EHRUg8mXe

Overall, this is just a terrible video. What makes it truly pathetic is that Bayless can’t even express genuine anger. You’d that would be easy given he’s a fan of the Cowboys. Instead, he put on a weird fake production with horrible directing skills.

Bro I’m dying😂😂😂 you can clearly see skip in the doorway😭 and the conversation before hand was “Ernestine, knock on the counter when you start filming” cause you can CLEARLY hear it lmaooo pic.twitter.com/YUoi3dFTqy

On top of that, there’s no bag in the trash can. So either Bayless is a complete weirdo and just throws trash into bagless cans or he made sure there was no actual trash in there so he can pull the jersey out afterward and hang it back up in the closet.

Either way, sports fans are having a field day mocking him after the Cowboys’ loss.

You know people can see this right?

People are even taking shots at the kitchen.

That backsplash is the Skip Bayless of backsplashes

This is the only win in the whole video.

Yeah, sports fans didn’t hold back when roasting Skip Bayless. But hey, when you’re someone who spews the most nonsense takes in sports, people are going to take their time roasting you when they have a chance.