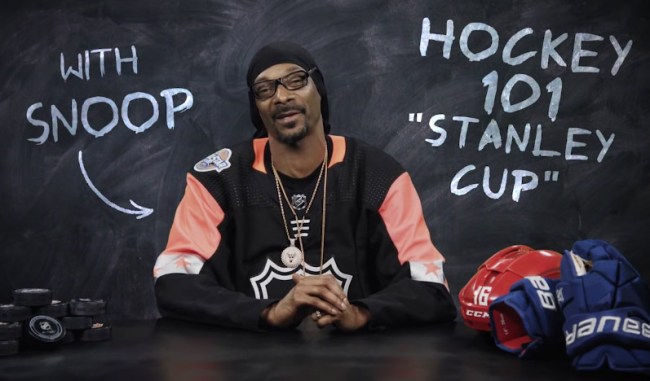 With the NHL playoffs officially getting underway, the league has enlisted none other than noted hockey expert Snoop Dogg to explain the sport in a new series called “Hockey 101.”

In the first episode of Snoop’s new weekly video series, Tha Doggfather explains the story behind the NHL’s grandest prize, the Stanley Cup.

Calling himself “The one and only 99 + 2 – The Greater One,” Snoop gives his greatest commentary since he began doing “Plizzanet Earth” for Jimmy Kimmel.

Now, for those of you who are scratching your head wondering why the NHL chose Snoop Dogg to give these hockey primers, it’s due in part to how well-received he was when he DJ’d the NHL Skills Competition back in January.

“One of the things we noticed when Snoop came to our All-Star game a couple years ago in Los Angeles was not only is he Snoop and everybody loves him, but he really loves hockey,” the NHL’s executive vice president Steve Mayer told Deadline in an interview. “The first thing he said when we walked into the East locker room was, ‘Sid the Kid!’” — calling out All World center Sidney Crosby of the two-time defending champion Pittsburgh Penguins. “He knows the players, he knows the game, and we started talking back then about how he feels like he can help promote the game.”

Future episodes of Snoop Dogg’s “Hockey 101” will see him explaining things like offsides, icing, the slang of hockey (that should be a good one), and more.

Check out the first entertaining episode below…