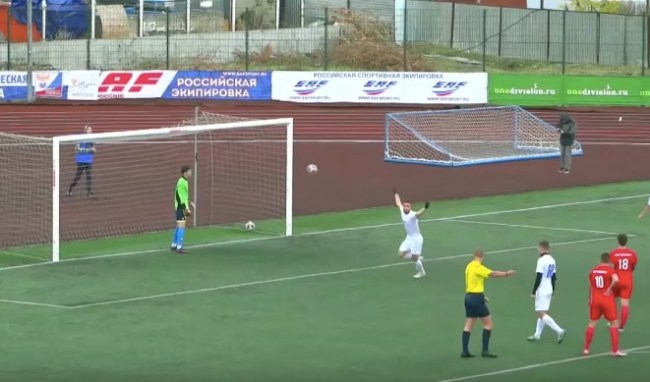 The penalty kick is typically a pretty straight-forward event in soccer. I can’t remember I time I watched a penalty kick like the one below and said ‘holy sh*t, that’s amazing’.

A typical penalty kick goes down like this. The (usually) pre-determined shooter lines up at the penalty marker to take the kick in front of the goalie. The shooter picks his spot at the left/middle/right and/or low/mid-top of the goal.

It all happens so quickly that the goalie chooses which way he’s jumping beforehand which is interesting because statistically speaking the best place for a penalty kicker to try and score a goal is straight up the middle.

The problem with going up the middle is you’re going to look like a complete asshat if you shoot straight and the goalie doesn’t move.

This penalty kick below is by Norik Avdalyan of the Rubin Kazan team in Russia’s National Student League, according to Deadspin, and it’s unlike any penalty kick you’ve ever seen.

The shooter goes upper-right corner but he pulls off an acrobatic move that’s so stunning it stops the goalie dead in his tracks and sends the team into a frenzy of celebration.

Without a doubt, this is the most insane penalty kick you’re ever going to see:

According to the YouTube description, this player (Norik Avdalyan) also pulled off this maneuver at some point back in 2017 but it appears to be going viral this time around since the camera was rolling and the world is able to marvel at this crazy feat.

This clip from a few months ago does a great job at explaining why penalty kicks are so wildly unfair for goalies. And that’s before the dude does a backflip. If you wan ta further explanation on the dynamics of a penalty kick then check this out: