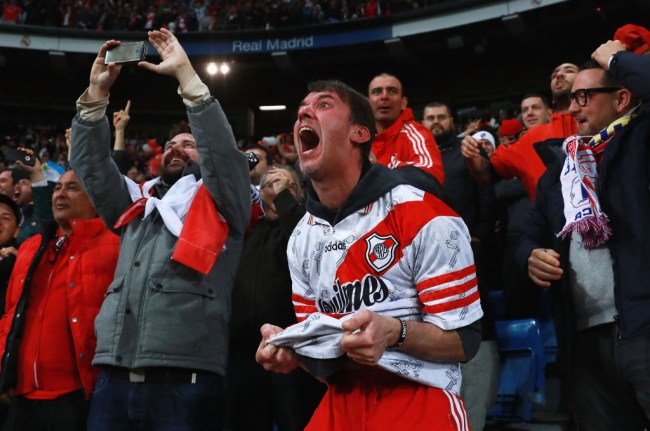 For the past couple of decades, soccer fans in the United States have constantly been telling themselves (and anyone who will listen) that this is the year the sport will finally take America by storm but you’re simply not living in reality if you think it’s even close to breaking into the mainstream.

It certainly doesn’t help that the U.S. Men’s National Team sucks a donkey farm’s worth of ass but the truth is soccer simply isn’t ingrained in American culture like it is in other countries and likely never will be.

Sure, maybe MLS attendance numbers are trending upward but I don’t think we’re ever going to live in a world where someone gets stabbed to death for talking shit about the Seattle Sounders.

I’m not saying there aren’t Americans out there who take soccer far too seriously, but as a whole, they have nothing on the rest of the world when it comes to how far they’ll go to support their team.

There are countless stories that highlight just how insane soccer fans can be and our latest example comes courtesy of someone in Argentina who recently decided to get a very questionable tattoo to commemorate River Plate’s victory over Boca Juniors at the most recent Copa Libertadores.

A River Plate fan got a QR code tattooed on them that shows the Copa Libertadores final goals against Boca Juniors whenever you scan it with your phone. 😂

The ink in question was a QR code that linked to a YouTube video of the goals River Plate scored in the finals to take home the championship, which is admittedly a pretty cool concept that should have remained just that: a concept.

However, after the clip of the tattoo being scanned started to circulate online, the YouTube video in question mysteriously disappeared from the website, which initially appeared to be the work of an army of trolls who reported the highlight reel for copyright infringement.

While that made for a great story, Gizmodo reached out to YouTube and learned the video hadn’t been taken down but rather set to private by the person who uploaded it, which is still pretty hilarious when you realize this dude is walking around with a tattoo that’s as hideous as it is useful.

Good luck covering that one up.