Fans, Players, And Coaches Alike Unite To Speak Out Against ‘The Super League’ 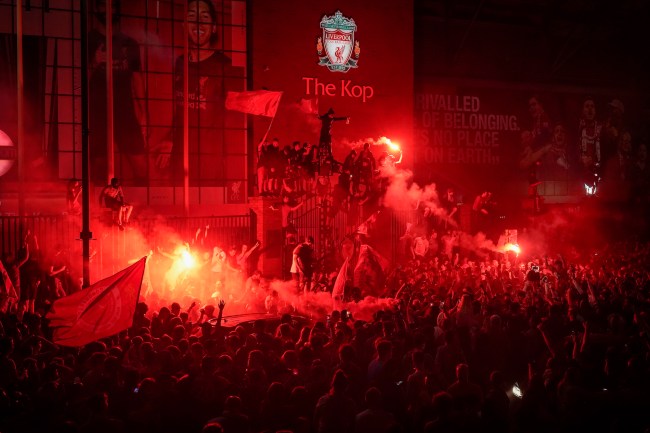 Even if you don’t passionately follow the game of soccer, you’ve likely heard of the announcement of “The Super League” — which, honestly, just sounds like the sort of sports league that would exist in the post-modern dystopia we’re living in.

Over the weekend, 12 of the world’s biggest football clubs announced that they would be combining to form The Super League, a midweek competition that would effectively replace the Champions League and upend the game as we know it.

“Twelve of Europe’s leading football clubs have today come together to announce they have agreed to establish a new mid-week competition, the Super League, governed by its Founding Clubs,” the official statement from Liverpool Football Club reads.

Going forward, the Founding Clubs look forward to holding discussions with UEFA and FIFA to work together in partnership to deliver the best outcomes for the new League and for football as a whole.

As soon as the league was announced, the response from fans, players, managers, and pundits was almost unanimous in its disgust, as those involved with the game at every level but the top seem to despise the idea of a Super League, as it effectively robs the game of the very magic it was built on.

On Sunday night, following the official debut of The Super League, the aforementioned fans, players, managers, and pundits that have spent their life loving the game of soccer took to social media to speak out against the decision,  using whatever influence they have to fight back against the growing Super League tide.

Kids grow up dreaming to win the World Cup and the Champions League – not any Super League. The enjoyment of big games is that they only happen once or twice a year, not every week. Really hard to understand for all football fans out there…⚽💔

Today I wake up to crazy news! 😡 An insult to my belief: football is happiness, freedom, passion, fans and is for everyone. This project is disgusting, not fair and I’m disappointed to see clubs I represented involved. Fight against this! 💪🏻❤️⚽️ #StopTheSuperLeague

What an embarrassment we’ve become @LFC think of all the people who have come before us at this club who would be equally embarrassed as well. #SuperLeague https://t.co/zLxhNyeaXB

"For me, the Champions League is the Super League, in which you do not always end up playing against the same teams… Why should we create a system where Liverpool faces Real Madrid for 10 straight years? Who wants to see that every year?" pic.twitter.com/DHB8HVIKo9

Sense this Super League plot will die on its preposterous and avaricious arse.

Liverpool fans are fighting back after their club became a founding member of the European Super League. pic.twitter.com/SotO2pSj10

⚽️ “Football has to stay united.”

❌ “I believe, personally, that this ESL idea will not go far.”

🙏 “We must fight to keep football simple, understandable, and based on merit!”

Bo Svensson has a clear opinion on the idea of the Super League.#Mainz05 pic.twitter.com/wHD8nr7tXL

🗣 "We are not concerned with being or not, we are in the Champions League and we hope to continue to be for many years." pic.twitter.com/kskNajlxPq

🗣 "I don't think it's good news for fans or football in this country. I don't like the look of these proposals."

Boris Johnson's reaction to the proposals of a 'European Super League' pic.twitter.com/xuqBxCNmFI

The Super League saga is only just beginning, as the clubs involved seemed set in their ways, while those opposed — such as FIFA, UEFA, etc. — are doing everything in their power to stop the league from becoming a reality, such as threatening to ban participating players from international competitions such as the World Cup.