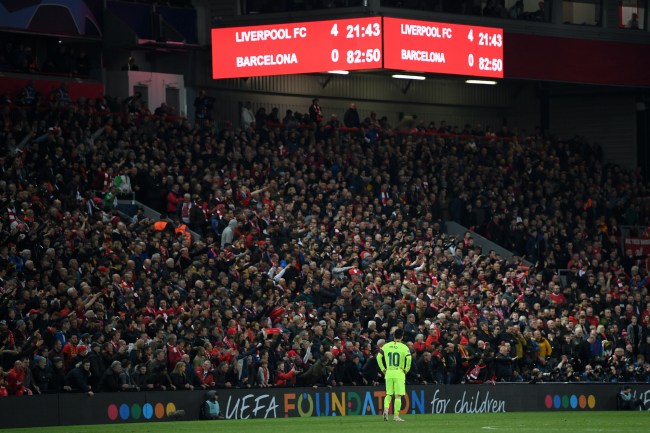 It’s a phrase every soccer fan is familiar with, whether they fancy themselves Premier League fanatics or Bundesliga purists, Serie A old-schoolers or La Liga newcomers. It’s the type of phrase, similar to Fourth of July or “summer going into Senior Year”, that has the ability to transport you to a distinct moment in time, instantly resubmerging your senses into the state they were in way back when. If you ask me where I was the night Liverpool took that corner quickly to take down Barcelona, I can tell you exactly where I was, how I felt, and how angry my neighbors were with the noise I was making. Like most features of the beautiful game, European nights are a bridge to emotions, to memories, that we wouldn’t have access to otherwise. Emotions and memories built on magic. The same can be said of the night Liverpool clinched the Premier League — a night that fans of the club, generations apart, had been desperately waiting for despite the fact that they’re one of the world’s elite clubs. It wasn’t given, it was earned, making the conquering of the mountaintop all the sweeter. Find me a fan who wants to give that away.

And that’s sport in its purest form, isn’t it? Magic. The 2016 Leicester Citys and the 1983 NC States, the 2007 Giants, and the 1980 men’s Olympic hockey team — whether you passionately follow the sports these teams hail from is irrelevant, as you’ve likely heard of them all the same. That’s the type of legend that only magic can buy, specifically, the magic of the underdog. And that, that right there, is the issue with the newly announced European Super League: the lack of magic.

“Twelve of Europe’s leading football clubs have today come together to announce they have agreed to establish a new mid-week competition, the Super League, governed by its Founding Clubs,” the official statement from Liverpool Football Club reads.

Going forward, the Founding Clubs look forward to holding discussions with UEFA and FIFA to work together in partnership to deliver the best outcomes for the new League and for football as a whole.

The formation of the Super League comes at a time when the global pandemic has accelerated the instability in the existing European football economic model. Further, for a number of years, the Founding Clubs have had the objective of improving the quality and intensity of existing European competitions throughout each season, and of creating a format for top clubs and players to compete on a regular basis.”

The fallout from the news was sweeping and swift. Fans and pundits alike have buried the decision, lambasting the move as nothing more than rampant greed from those at the highest level of the game. Former Manchester United defender Gary Neville, in particular, went viral for his articulation of the issue and why it’s so detrimental to the game.

😡 | "I'm a #MUFC fan and I'm absolutely disgusted."
💥 | "They are an absolute joke."@GNev2 gives a brutally honest reaction to reports that England's biggest clubs are expected to be part of plans for a breakaway European Super League. pic.twitter.com/VfJccHgybc

RELATED: What Is The New $6 Billion European ‘Super League’ Sending Shockwaves Across The Soccer Landscape?

The core of the issue is a capitalism-gone-wrong tale that’s as old as time, wherein the top 1% are making decisions that effectively cut out the remaining 99%, although in this instance, the tantalizing lie that hard work and dedication can see you break into that elite class — i.e. qualifying for the Champions League — is removed entirely, as membership into The Super League seems to be contingent on an invite, something that all but ends the dream of another Leicester City. As hollow as the billionaires at the heads of these clubs, The Super League isn’t a competition, but a marketing ploy. It’s not meant to grow the game’s profile but rather price out those who can’t afford to compete at the highest level. It’s taking once-grand occasions and commodifying them to such a degree that it creates something new entirely. It’s Amazon coming into town and turning your favorite bodega into a Prime Pick-Up Center.

In the Champions League, seeing the likes of Real Madrid and Liverpool square off is an event to be admired, a moment to be relished, a privilege to be cherished. In The Super League, it’ll just be another Tuesday night. Where’s the magic in that?