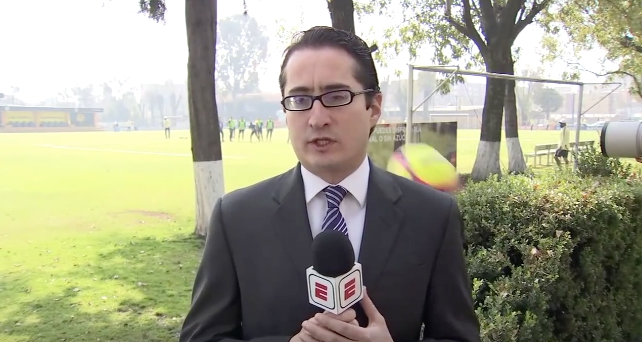 Club America announced that it will sanction Colombian winger Carlos Darwin Quintero after he allegedly intentionally tried to drill an ESPN reporter broadcasting live during a training session Tuesday.

ESPN reporter Marcelino Fernandez was inches away from becoming a viral sensation when Quintero launched a strike from very far away, between two trees and humming past his left shoulder. After a startled shrug, Fernandez continued his report like a consummate professional.

The Mexico City club released a statement on Wednesday sanctioning its 30-year-old winger. It read:

“Club America informs that the player Darwin Quintero will be sanctioned internally after the unfortunate action he carried out during yesterday’s training, which doesn’t represent the values of this institution. The club laments what happened and offers an apology to the reporter Marcelino Fernandez of ESPN and his crew, as well as anyone who may have been offended by what happened.”

Despite the allegations by his own club, Quintero tried to swindle the public a tall tale about him trying to hit the tree instead. Via Goal.com:

“At no time did I shoot the ball to hit him,” Quintero said. “We were betting on who could hit the tree because at this angle it was really hard to hit it at the reporter from that angle. Before you say something, you should investigate better.”

If that ball drilled Fernandez in the back of the melon, I 100% believe that Quintero would have raised his arms and yelled “O’Doyle Rules!” Trying to hit the tree, my ass.