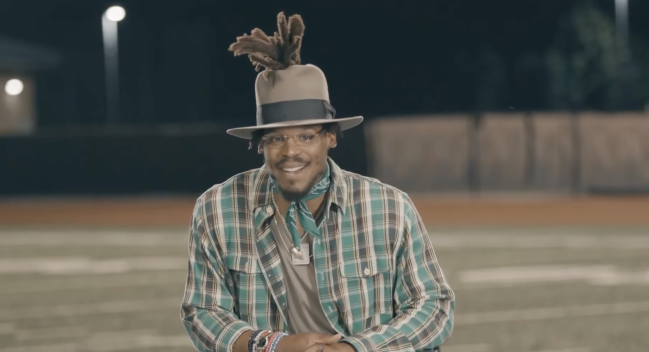 Cam Newton is a man that once admitted to spending millions of dollars on clothes he’s only worn once. He has a unique eye for fashion, to put it lightly, as we’ve all been witness to his ridiculous outfits throughout his career, but the hat in his recent YouTube video may just be his most absurd fashion choice to date.

Newton sat down with his father, Cecil Newton Sr., to talk about being cut by the New England Patriots in a YouTube video posted to his own personal channel. With the cameras rolling, Newton had to bring the heat with his outfit. While the whole fit was pretty tame for Newton standards – even with the Aladdin-looking pants – it was his hat that truly stole the show.

It legitimately looks like Newton has a Christmas tree growing from his head. This man took a nice hat and cut a hole in it so his hair could jump out of the top.

I thought Cam Newton was rocking an antler hat for a second. pic.twitter.com/EiHZVHxrfL

I love Cam Newton very much and his hat and hair in this video alone totally support his distraction theory. https://t.co/HsxXkwF3J1

There are many reasons why I am not an NFL GM, but the biggest one is I would have released Cam Newton the second he walked into my office wearing that hat. https://t.co/cYGZdH7F00

Cam Newton’s hair coming out of his hat like pic.twitter.com/02hRHJ5UDN

One of the many topics discussed in the interview was whether or not Newton truly was having to learn the playbook from rookie Mac Jones, which had been reported. Newton denied the report Jones had to help him learn the Patriots playbook. He did, however, admit that the team had to “dumb it down” for him due to his underwhelming performance last year.