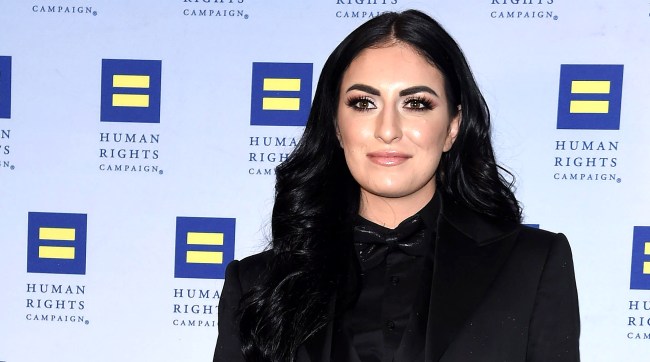 This past Sunday a man was arrested and charged with three felonies, attempted armed kidnapping, armed burglary and aggravated stalking, after stalking and then breaking into the home of WWE star and former mixed martial artist Sonya Deville (real name Daria Berenato) while she slept.

According to police, the man, 24-year-old Phillip Thomas, had been planning the alleged crime for eight months and when arrested, while still inside the house, was carrying was carrying a knife, plastic zip ties, duct tape, mace.

Hillsborough County Sheriff Chad Chronister (yes, that Chad Chronister) said about the case, “It’s frightening to think of all the ways this incident could have played out had the home alarm not gone off and alerted the homeowner of an intruder. Our deputies arrived within minutes and arrested this man who was clearly on a mission to inflict harm.”

Frightening indeed as on Monday the Tampa Bay Times obtained a copy of the court petition filed by Deville seeking protection from Thomas and it is harrowing.

“What are doing, what do you want?” Deville yelled as he stared at her from just four feet away. He then began to walk toward her.

“That is when I realized this person was not here to rob me, he was there to hurt me,” Deville, whose real name is Daria Berenato, wrote in a court petition seeking protection from the man authorities have identified as 24-year-old Phillip A. Thomas II.

Thomas was holding a knife and pepper spray when he came face to face with Berenato, records say.

The petition for stalking protection that Berenato filed Monday offers new details about her encounter early Sunday with a man described by authorities as an obsessed stalker who drove from South Carolina with plans to kidnap her. The document also outlines the increasingly threatening messages that authorities say Thomas sent by social media, including one message from inside her lanai.

Amanda Saccomanno, AKA Mandy Rose in the WWE, was also in the house at the time. She and Deville escaped through the garage and drove away. Thomas remained in the home, thinking the women were hiding upstairs, as Deville watched video of him on her security system.

When Deville checked her Instagram account to look and see if Thomas had been commenting she found numerous disturbing messages including one that arrived shortly before he broke in which read, “Look outside, baby, by your pool. I’m here. I’m gonna kill that little b*tch you have inside with you.”

According to the arrest report and motion filed by prosecutors, Thomas allegedly cut a hole in a patio screen and remained on the patio three to four hours while watching and listening to the women through the windows.

Thank you everyone for your love and concern. A very frightening experience but thankfully everyone is safe. A special thank you to Hillsborough County Sheriff’s Office for their response and assistance. 🖤

“The defendant admitted that his intention was to take Mrs. Berenato hostage by spraying her (with) pepper spray, binding her hands with the zip ties, and wrapping duct tape around her arms to prevent from fighting back,” reads the prosecutor’s motion. “He stated that he intended to keep Mrs. Bernato hostage, preventing her from attending a planned event schedule for the following week, and that he was not going to leave her residence without her answering all of his questions.”

Thomas is scheduled to have a hearing on Thursday on a prosecution motion to prevent his release on bail.