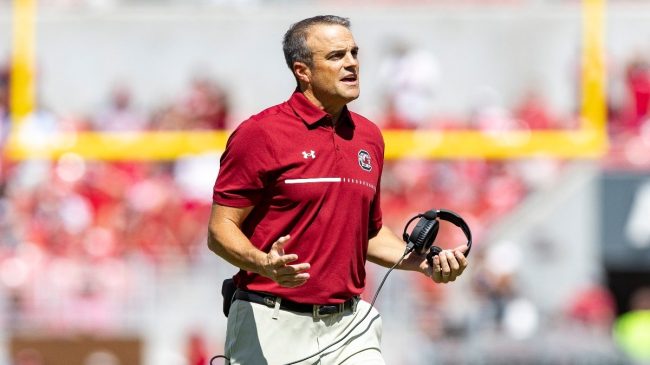 The South Carolina Gamecocks head coach is under fire on Monday during the game against the Georgia Bulldogs. Although it quickly turned into an onslaught, head coach Shane Beamer was seen yelling at female student-athletes to get off of the field. However, they were on the field being honored for 50 years of Title IX.

Yeah, that’s not a great look. For anyone not sure what Title IX is, it’s a civil rights law that “prohibits sex discrimination in the education programs and activities of entities that receive federal financial assistance,” per HHS.gov. Jyllissa Harris shares exactly what transpired during the South Carolina game on Saturday.

This is not a great look for Shane Beamer. Especially considering Title IX is a law put in place for women’s equal rights. Seeing female student-athletes yelled at to leave the field while being honored for that exact law is incredibly ironic. And not in a good way.

According to the Washington Post, the South Carolina head coach has issued an apology. He explains what transpired from his perspective on the situation. “We send our offense out there to go for it. They’re on the line of scrimmage. Georgia is able to see the formation that we’re in. We did what we were asked to do and we were not able to snap the football. I look down in the end zone and I see why. My first initial reaction was to yell, ‘Get off the field.’ I had no idea who was down there.”

Eventually, Beamer apologized, saying he was “worried about what was going on in our own offensive huddle. I apologize to anyone that I offended. That was just my initial reaction.”

It might very well have been a total miscommunication error. However, it’s still not the greatest look. Especially considering the play South Carolina ran after the incident was a complete dud.

Shane Beamer had to yell at everyone involved in the ceremony to get off the field because he needed to run a play he drew up where they threw the ball five yards short of the sticks on fourth down against the best tackling defense in the country. https://t.co/cYySvtofiE

At the end of the day, Jyllissa Harris doesn’t hold anything against Shane Beamer or the Gamecocks football team.

Very well said! Like you said there is just still work to do! Coach Beamer however was coaching in the heat of the game and has been nothing but supportive of female sports. https://t.co/zz85cw1VDt

Hopefully, the Gamecocks can at least recover from the brutal beating they received from the Georiga Bulldogs. Especially with conference play coming up.