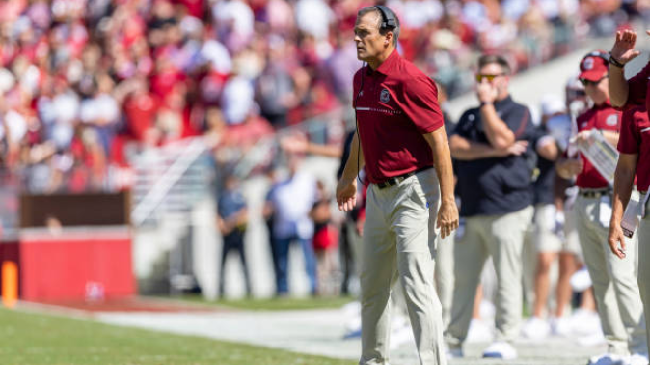 It has been a rough couple of weeks for South Carolina’s football program.

Last week, the Gamecocks traveled to Fayetteville to take on the 16th ranked Arkansas Razorbacks. They lost 44-30 in a game where Arkansas appeared to be in control from start to finish.

Things didn’t get any easier for them this week as they had to play host to the top-ranked Georgia Bulldogs today. This one didn’t go to well for them either. Georgia continued to look like the best football team in the country as they dominated South Carolina on their way to a 48-7 win.

After the game, Gamecocks head coach Shane Beamer spoke to the media and fielded one question that he was clearly not pleased with.

Beamer if he sensed any quote “give up” in the locker room. His response was a swift “hell no”.

Shane Beamer was asked if he sensed any give up in his team following todays loss to Georgia.

The Gamecocks have to be frustrated after the way the past two weeks, but there is at least a bright side coming out of these disappointing performances. First of all, just about any team in the country would have had a tough two weeks if they had to play Arkansas on the road and then play Georgia right after.

2nd, they didn’t look entirely out of their depth in a road matchup against a strong Arkansas team, which means they should be able to compete over the course of their SEC schedule. 3rd, their schedule gets much more friendly from here.

Over the next 2 weeks, they get home games against Charlotte and SC State. Those will be great opportunities for South Carolina to get themselves heading back in the right direction and prove that the team hasn’t given up after a couple of tough games.