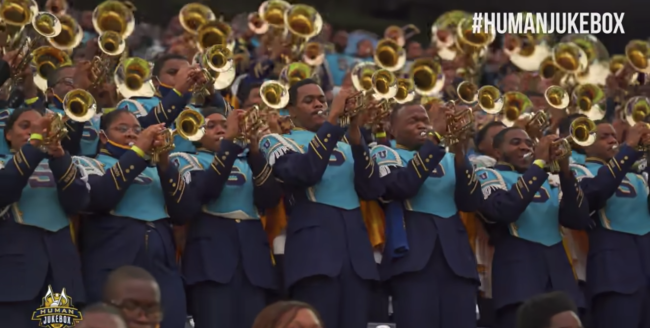 For those of you who are not familiar with the greatness that is the Southern University Human Jukebox, let this be your baptism. The brass-blaring, drum-banging bunch from Louisiana is the among the best of the best when it comes to collegiate marching bands.

For some (if not most) HBCU schools, the most important part of Saturdays is not the football team, but the band. That is the case at Southern University.

They recently covered Lil Nas X’s smash hit ‘Industry Baby’ and it will catch your speakers on fire. The original song has a very horn-heavy melody to it, so the Jukebox’s performance is a perfect choice and they absolutely blew it out.

Featured with the band are the fabulous dancing dolls. The beloved dance troupe has been a crucial part to the Human Jukebox since the 1950s and they’re delightful.

The performance of ‘Industry Baby’ took place at the National Battle of the Bands over the weekend in Houston at NRG Stadium. This year’s competition (more of a showcase) featured bands from Talladega College, Langston University, Norfolk State, Tennessee State, Jackson State, North Carolina A&T, and Southern.

All eight bands competed in stand battles, like that of Industry Baby, as well as choreographed field performances. Here is the Human Jukebox’s field show:

If you ever have a chance to get to a battle of the bands like this, or even an HBCU football game, I cannot recommend it enough. The bands will have you jamming out from start to finish. And they always arrive in style: