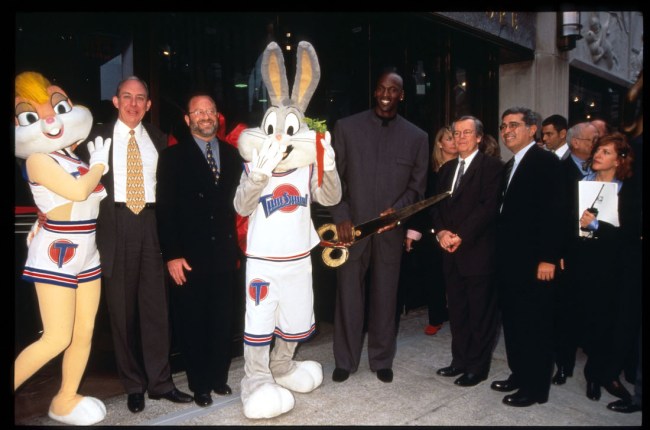 While everyone’s anticipating the release of a Space Jam sequel — which stars LeBron James alongside a slew of other NBA stars and celebrities, and is set to hit the box office later this year — nobody should forget about the original cult classic. Debuting in 1996, the movie featured Michael Jordan and a bunch of Looney Tunes’ characters playing NBA stars turned Monstars in an epic basketball game.

But, according to the film’s director, Joe Pytka, Space Jam abruptly ended without bringing the storyline full circle — and he’s still pissed that the original ending was cut out of the movie.

Recently talking to Entertainment Weekly about the film, Pytka describes the movie’s alternate ending, which included Michael Jordan hitting a walk-off homer for his baseball team, with a scene that was “ripped off” from the classic sports flick The Natural. Unfortunately, the edit team cut that ending, and it still irks the director to this day — mainly because it didn’t follow the original storyline about Jordan’s baseball career in the movie.

“It’s a tight game, the stands are full, and Michael looks up and his son gives him a sign to widen his stance, a call back to something he said at the beginning,” he recalled. “Then Michael hits a home run and trots around the bases like Robert Redford, with all these flashes popping. Instead of everything falling from the broken lights like in The Natural, I had this special effect with everyone taking pictures with those little cheap cameras you could buy for a dollar.”

The sequence ended up cut, which, according to Pytka, sort of undercut Jordan’s tight schedule in the movie.

“There was an urgency for him to come back for the game but then he comes back and there’s no game,” he continued. “It always pissed me off that they didn’t put that in there. The ending should have been him hitting the home run. Maybe it was running too long or it was too expensive to do [the effect]. Ivan Reitman, the producer, admitted to me they never knew how to end the film. It kind of meandered.”

Instead, the story leaps forward as Jordan returns the stolen talent taken by the Monstars and comes out of basketball retirement. “I don’t want to trash the film because it was such a success but it would have added a slight dimension to the film,” Pytka said of the axed baseball scene. “Maybe people thought it was too corny.”

It’s understandable that Pytka’s upset about this, and, honestly, the home run ending would’ve made more sense given the original Space Jam plot. Then again, I was, like, 12 years old when Michael Jordan and these other NBA players starred in the movie, so I wasn’t exactly looking for holes in the flick.

As for Joe Pytka’s thoughts on the LeBron James-led sequel, well, let’s just say he’s not too thrilled about the idea. Talking to Entertainment Weekly back in 2016, he explained why there’s no reason to try to duplicate the original movie’s success.

“I think it’s ridiculous to try and make a different movie out of it,” he declares. “I can’t see it. I can’t imagine how it could be what that film was. Not that Space Jam is a great movie, but it had something that touched that period of time because of who those athletes were and it doesn’t exist anymore.”

Space Jam: A New Legacy hits theaters on July 16, 2021, so, regardless of Pytka’s opinions of the film, it’s full steam ahead. All that’s left is, eventually, comparing the original movie with the sequel, and figure out which one reigns supreme between the two.