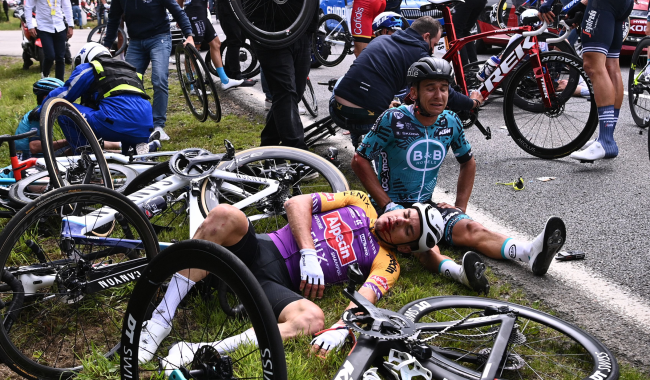 The spectator who caused a massive crash involving numerous cyclists at the Tour de France when she tried to hold up a sign in front of the entire field while looking at the camera appeared in court in Brest, France this week for her trial.

The unidentified 31-year-old woman from Brittany in France initially fled and went into hiding for four days before turning herself in to police was charged with endangering lives and causing unintentional injuries and faces a fine of up to €15,000 ($17,383) and a year in prison.

She remains unidentified because, as The Guardian reports, “she was subjected to online abuse.”

She also, according to a prosecutor, says she feels ashamed of her “stupidity.”

A lawyer for the International Association of Riders says the organization is seeking a symbolic €1 ($1.16) in damages as a warning to future spectators.

“This case is representative of what can happen with people who want to take center-stage themselves with pictures, videos,” said Romuald Palao, a lawyer for the Professional Cyclists’ Association. “It has to be done with a minimum of common sense and this was not the case there.”

RTE reports that Palao revealed after the woman’s hearing that the court has postponed its ruling on the case to December 9th. The lawyer for the woman declined to comment.

A source close to the case said the lawyer could argue that race organisers had failed to take sufficient security measures, citing the series of accidents that marked the 108th edition of the Tour.

The trial came the same day as organisers unveiled the route and stages for next year’s race, which will start in Copenhagen and also includes routes in Switzerland and Belgium.

Back in July, Tour de France organizers withdrew their lawsuit against the spectator because they felt reaction to her error in judgement, which caused significant injuries to 21 cyclists including Spain’s Marc Soler breaking both arms, was blown out of proportion.