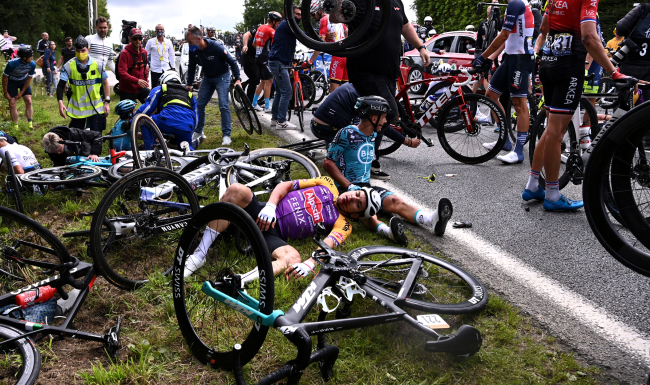 The spectator who caused a massive crash involving numerous cyclists at the Tour de France has gone missing, and has reportedly fled to Germany, according to authorities.

The woman, who caused the crash by holding up a banner in front of the entire field while looking at the camera, reportedly fled the scene and has yet to be found, according to Ouest-France.

French police are using social media to assist in their search for the woman in the yellow jacket who triggered the Tour De France crash by making contact with German cyclist Tony Martin.

“In the framework of an accident on 26/06/21 on the RD30 municipality of St Cadou, during the first stage of Tour de France 2021, a judicial investigation is opened for ‘involuntary injuries by deliberate breach of an obligation of safety or caution,’ Gendarmerie du Finistère wrote on Facebook.

“The spectator causing this accident left the scene before the investigators arrived. She was wearing glasses and dressed in blue jeans, red and white stripe sweater, yellow jacket (waxed). She holds a sign supporting the inscription ′’ALLEZ OPI-IMO!’

“Anyone with information is kindly asked to call the Finistère Gendarmerie Operational Centre.”

According to French newspaper L’Equipe, the spectator who caused the Tour de France crash faces up to a year in prison and a fine of almost $18,000.

As a result of the crash she caused, German rider Jasha Sutterlin was forced to pull out of the Tour de France, however, according to Cycling News, a total of 21 cyclists received significant injuries in the smash-up.

THIS JUST IN: One news agency reportedly captured video of the spectator making her way out of France as she fled.