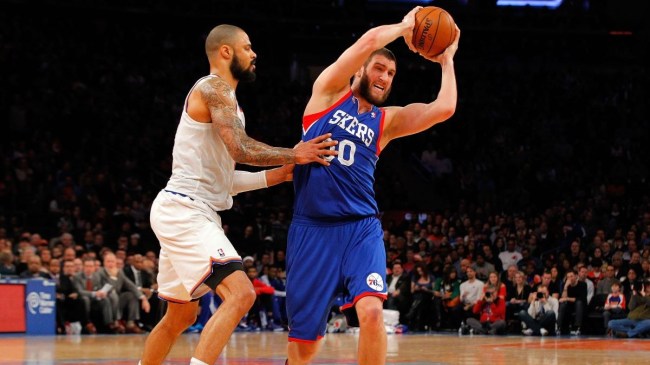 Trust this Philadelphia sports fan, the 2013-14 Philadelphia 76ers were not a very good basketball team. Despite boasting NBA Rookie of the Year Michael Carter-Williams (who is now out of the league), the Sixers went just 19-63 that season. It was, somehow, only the second-worst record in the league behind the Milwaukee Bucks.

But it allowed Philadelphia to draft Joel Embiid at No. 3 in the 2014 NBA Draft and the rest, as they say, is history. But that’s not really relevant to the current discussion.

Let’s rewind back to that awful 2013-14 team. How many players do you think you could name on that team off the top of your head? I’m gonna guess it’s probably less than five.

One of those players was stretch big man Spencer Hawes. Hawes, like Carter-Williams, is now out of the league. He was the No. 10 overall pick by the Sacramento Kings in the 2010 NBA Draft. He then bounced around the league before finishing his career with, ironically, the Bucks in 2017.

Hawes was one of 23 players to play for that Sixers team in 2013-14. And it appears his time in Philly, which spanned five years, wasn’t all that memorable.

Travonne Edwards of The Athletic recently began a game on Twitter where he asks followers to name all of the players in a picture he posts.

In one recent version of the game, Edwards posted a picture of, you guessed it, the 2013-14 Philadelphia 76ers. But it wasn’t the entire Sixers team. It wasn’t even the starting line. Instead, it was a group of players that even the most fervent of fans would have trouble naming.

Can you name all the players in this pic without googling? pic.twitter.com/D2WcRpaXwe

Mind you, Hawes was a member of this team. And yet…

No and I think I was on that team

Pictured, from left to right, are Jarvis Varnado, James Nunnally, James Anderson, Hollis Thompson and Elliot Willams. None of whom are still in the NBA,

Sam Hinkie was a mad genius and I miss him dearly.