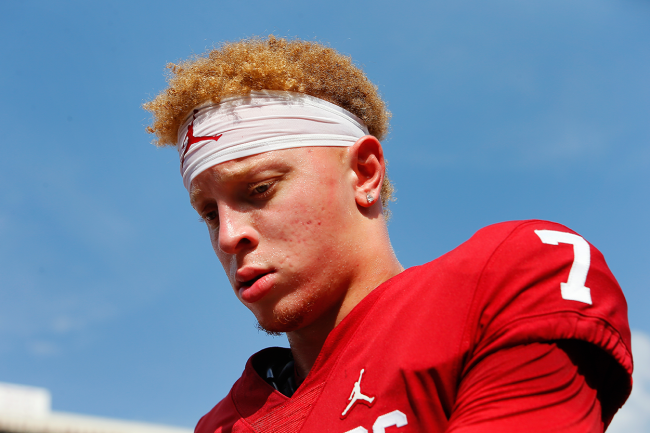 Spencer Rattler is trying to get back into Heisman Trophy contention at South Carolina. The former five-star quarterback, who spent his first few years at Oklahoma, transferred to play in the SEC early in the offseason.

It was a move that came largely because of the offensive system and his ties to head coach Shane Beamer. Although it is likely a one year stop before he tests the NFL waters and tries to go pro, there is a lot of hype around what the Gamecocks might be able to do this fall.

South Carolina, after two years below .500, went 7-6 with a bowl win over North Carolina in a season that everyone labeled a “rebuilding year.” It was not supposed to see a winning record, but Beamer got his bunch in order right away.

As a result, there is a buzz around Columbia. Rattler plays a huge role in that hype after being the No. 1-ranked quarterback in his recruiting class.

There is a spotlight that follows his every move, for good or for bad.

With the spring behind him, Rattler continues to work on his craft as he looks ahead to the fall and the future. To do so, he is among the many high-profile quarterbacks in attendance at the Manning Passing Academy this weekend.

While at the MPA, Spencer Rattler offered an extremely refreshing outlook on where he stands with his new team and his new offense.

After transferring to the South, Rattler has had no problem getting acclimated and fitting in. However, he was upfront about the work he (and his teammates) must do in regard to the offense. He said that he isn’t quite there yet.

“It’s been great, getting in a whole new system, whole new state, area, everything,” Rattler said. “Learning that new system, that pro-style type offense, it’s really helped my game I think so far. I have a long ways to go, but that’s what summer camp is for, that’s what fall camp’s for and we’re just going to keep grinding.”

As for the system that Rattler is in, he is thrilled about how well it sets him up for the next level. Especially compared to the offense he ran at Oklahoma.

“Being in this type of system, you can talk the game a little more,” Rattler said. There’s more verbiage, different play calls, and different reads. You’re under center. You’re doing a lot of stuff that the pros are doing, so that helps set you up for that next level and obviously mentally helps.”

In his lone year as the starter with the Sooners, Rattler finished with 3,031 yards passing, 28 touchdowns and seven interceptions in a COVID-shortened season. He also led OU to a Big 12 Championship and Cotton Bowl victory over Florida.

At South Carolina, he will have a different challenge. The Gamecocks have a significant hill to climb if they want to even think about being in SEC Championship contention or a New Year’s Six Bowl. Rattler will look to keep focused on getting to where he wants to be, even if the noise around him continues to reach deafening levels.

“You can’t really get bought into what people say,” he said. “That’s something I’ve learned in my college career so far and my career overall. So I really don’t focus on that. Definitely getting older and being able to go through adversity helps you with that. It doesn’t faze me.”

South Carolina opens its season against Georgia State on September 3rd. Is it Rattler’s year?