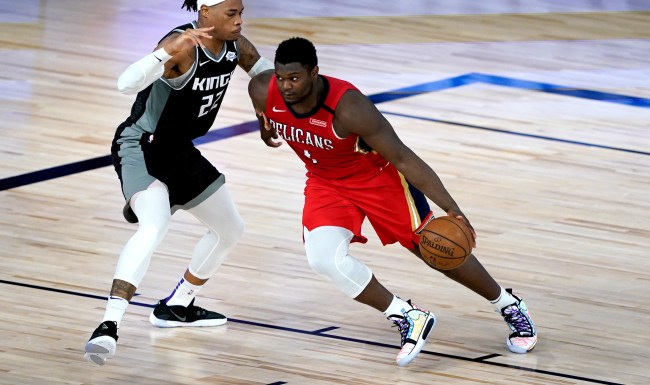 Well-known sports injury doctor Dr. Brian Sutterer says after watching Zion Williamson’s progression from playing college basketball at Duke to hooping for the New Orleans Pelicans in the NBA he has major concerns about the big man’s future.

“He’s in a race against his own body,” Sutterer recently told The Athletic.

“If you go watch his Duke highlights compared to now, the difference is profound,” he continued. “In my opinion, his athleticism and conditioning have regressed substantially. He’s less explosive, less conditioned, slower on defense, has already had a portion of his meniscus removed from his knee after an injury, and he’s still under close monitoring from the medical staff.”

After playing just one year at Duke, the now 20-year-old Williamson has struggled to stay fully healthy and on the court in his rookie NBA season.

Williamson tore his meniscus during the preseason back in October and recently admitted to SLAM, “When people asked me during the season where do you think I am [health-wise], I probably said something like 80-85 [percent]. But working out the past few months, I was way off. I was probably at, like, 60 percent.”

Sutterer went on the add, “I feel like nobody really wants to call it like we all see it. He’s trying to reverse a career trajectory that by the Pelicans’ own admission is worrisome as evidenced by his ‘reprogramming’ and scrutinized minutes. He had four months to start making positive strides and to me he’s regressed more. When will he finally start to reverse course? Will it be in time before more substantial fitness concerns and injuries limit him and threaten his career? Instead of outpacing these risks, I’m worried that Zion is losing the race.”

“I think [the Pelicans are pampering him]. And I certainly think that’s how he has come across,” Smith said on ESPN’s First Take. “Something’s wrong. Something’s fishy here. When you look at a guy like Zion Williamson, got hurt in high school, got hurt in college, got hurt in Summer League, comes back after a four-and-a-half month layoff, seemed a bit gimpy. Something doesn’t seem right, and I’m concerned about him moving forward in terms of him being a bit injury-prone. But in the same breath, he’s 20.”

It’s scary to think that if Williamson can ever actually get back to 100 percent healthy he’s going to be even better than he’s already been during his rookie season. The kid is averaging 22.4 points and 6.2 rebounds in just 27.9 minutes a game and at age 19 became the youngest player in NBA history to score more than 20 points in 13 straight games. That’s more than pretty good.