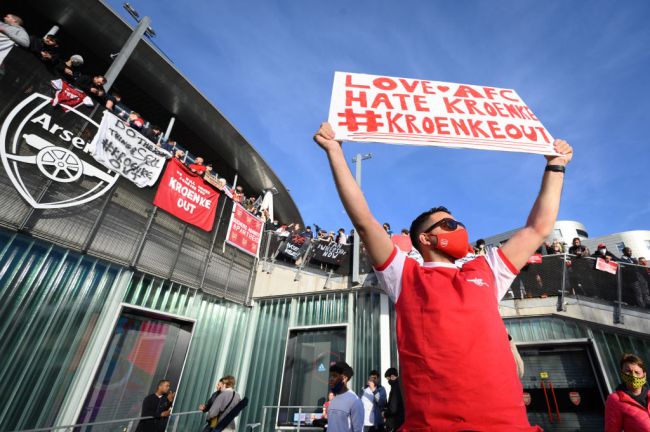 Shortly after Arsenal made the colossal mistake of joining the European Super League and then wisely pulling out of the league, Spotify co-founder Daniel Ek tweeted that if current club owner Stan Kroenke was interested in selling the team then he would be interested in throwing his hat into the ring.

It appears that the 38-year-old Swedish businessman was very serious as Ek has reportedly teamed up with Arsenal legends Thierry Henry, Dennis Bergkamp, and Patrick Viera to launch a bid to buy the club. Various reports have stated that the Kroenke’s are looking to sell the club, so this selling and purchase scenario appears to have at least some sort of legs beneath it.

Kroenke, who also owns the Los Angeles Rams, Denver Nuggets, Colorado Rapids, and Colorado Avalanche has been the majority shareholder of Arsenal since 2011. The vast majority of Arsenal supporters were already fed up with Kroenke, but his latest move to join the Super League has taken frustrations to an entirely different level and could be the perfect time for him to get out.

While Ek could be a bit of a question mark for Arsenal supporters when it comes to possible owners, you couldn’t find a single fan that wouldn’t be completely on board with the idea of Henry, Viera, and Bergkamp having some sort of role in ownership.

Having said that, Kroenke could also ride this very real nightmare out and remain the owner of the North London club. He is no stranger to seeing Arsenal supporters upset with him and his son Josh, who has served as the non-executive director of the club since 2013.

The Athletic's David Ornstein believes it would take an 'astronomical' offer for the Kroenkes to even consider selling Arsenal. pic.twitter.com/S9bGLxaqVw

When looking at the money involved, Ek is reportedly worth $5.7 billion with Arsenal recently valued to be worth $2.8 billion.