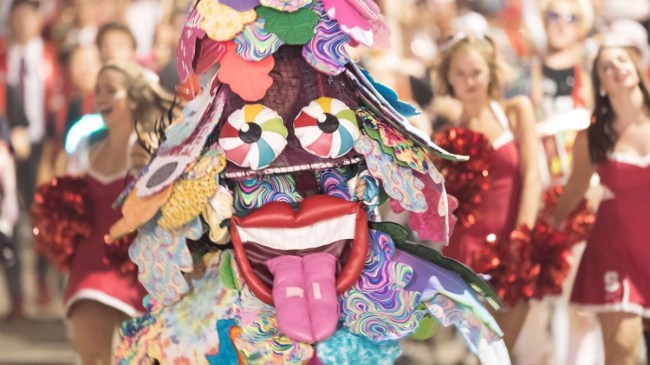 I can’t say this is one I’ve seen before. But you’re going to want to buckle in. Stanford University has allegedly suspended the university’s famous tree mascot for a number of months.

Stanford has decided to suspend the Tree for walking out onto the field last game with a sign reading 'Stanford Hates Fun'. Tree socials will be inactive for the next few months. See y'all soon. 🌲.

What exactly could have prompted this, you ask? Good question!

No, the tree was not taking tree steroids. In fact, it didn’t even do anything vulgar like shed its leaves in public or say something completely out of line. Instead, it appears that the school suspended the mascot over a relatively harmless sign it unfurled during halftime of Staford’s game with Arizona State on Oct. 22.

I saw this happen. I didn’t know if there was a bigger story. Seemed like a harmless thing. I mean.. it’s not like the band formed a gun shape and shot trees out like bullets at a devil.. or a bear. 🫢🥶🌲 pic.twitter.com/mglvTtab1x

This is the sign that apparently led to the suspension of @DaStanfordTree "for the next few months"#FreeTheTree ✊🌲 https://t.co/nYekJHn9fW

The sign read simply: “Stanford Hates Fun.” Sure, taking shots at your own university is a bit strange. But it seems innocuous enough.

But herein lies the catch. The sign is apparently part of an ongoing protest by Stanford students against what they deem is a crackdown by the university on student social life.

For more information on the issue, we turn it over to the wonderful work of the students over at The Stanford Daily.

Across more than a dozen interviews with The Daily, students alleged that Stanford has exerted pressure through its policies, lack of communication and adversarial approach to party registration and funding.

The University, on the other hand, has maintained that it has worked to provide social opportunities for students during this academic year, the first in two years free of widespread pandemic restrictions.

But a University spokesperson broadly declined to comment on specific allegations raised by students for this article, and numbers provided by the spokesperson indicate that the number of social events on campus has fallen sharply. – via The Stanford Daily

The report states that just 45 registered campus parties occurred during the first four weeks of the fall term. That’s a significant drop from the 158 held in 2019. The school also shut down the annual “Eurotrash” party held by Kappa Sigma, which is typically the first party of the year.

Students are instead embracing their inner Philly. They’ve reportedly turned to partying in the campus streets and walkways and climbing light poles.

In shutting down partying, administrators appear to have only made things worse. And now the poor tree is just collateral damage.