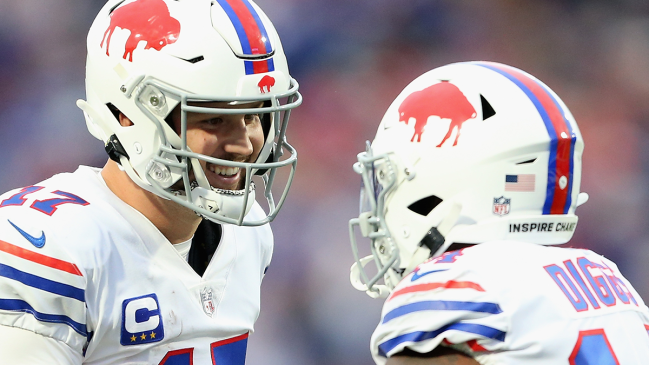 When the Buffalo Bills scooped up Josh Allen with the seventh pick in the 2018 NFL Draft, there were plenty of fans who were convinced the franchise had opted to put its faith in “the wrong Josh,” as Josh Rosen (who was selected by the Cardinals with the 10th pick) was widely viewed as the superior option at the time.

However, that retroactively Freezing Cold Take did not age well. Rosen is currently a free agent who never managed to make a mark with any of the six teams who’ve given him a chance, while Allen has played the biggest role in helping the formerly hapless Bills not only turn things around but transform into one of the most formidable squads the league currently has to offer.

Allen has obviously gotten some help from his teammates—including Stefon Diggs, the wide receiver who was best known for snagging the winning touchdown in the seemingly impossible play dubbed the “Minneapolis Miracle” before the Vikings sent him to Buffalo in exchange for a handful of draft picks in 2020.

It’s safe to say Diggs has taken full advantage of that change of scenery. During his first season with the Bills, he led the league in total receptions and receiving yards, which resulted in him earning All-Pro honors and getting the first of the two Pro Bowl game selections he’s racked up since taking his talents to upstate New York.

The wideout obviously owes Allen for some of that success—and he made it very clear he’s incredibly appreciative of his QB based on what he had to say during a recent conversation with Von Miller.

Diggs was the guest of honor on a recent episode of The Voncast where he revealed he narrowly avoided being traded to the Jets before the Bills thankfully spared him from that fate and gave him the chance to team up with Allen, who the wide receiver lauded while discussing how he’s changed his game.

"[Josh Allen] really changed my career. … This that quarterback that God had for me" 💯 pic.twitter.com/Fj1dcWO5qF

“[Allen] really changed my career from where I was to how I’m viewed now. I always saw myself as that player, but it was hard to put the pen to paper because my stats weren’t a match; my play was good but wasn’t as good.

I used to run good routes, but I really wanted to cement myself as one of the best players—if not the best receiver—in the league.

So when I first got to Buffalo, it was like it worked in tandem. Like, Josh Allen needed a wide receiver. He had some good-ass receivers—John Brown was a hell of a receiver, Cole Beasley is still one of the best receivers I’ve ever played with, if not the best wide receiver I’ve ever seen—but they needed something.

From that point on, we was hooping. Up to this point now, it’s like, ‘S—t, how good can we be?’ Because if you’ve got a good quarterback, you’ve got something. I’m grateful, because I’ve had some good quarterbacks in the past, but this is the quarterback that God had for me at the end of the tunnel.”