The Loser Of A Rock, Paper, Scissors Game Between Klay Thompson And Steph Curry Had To Introduce Andre Iguodala In His Return Game At Golden State 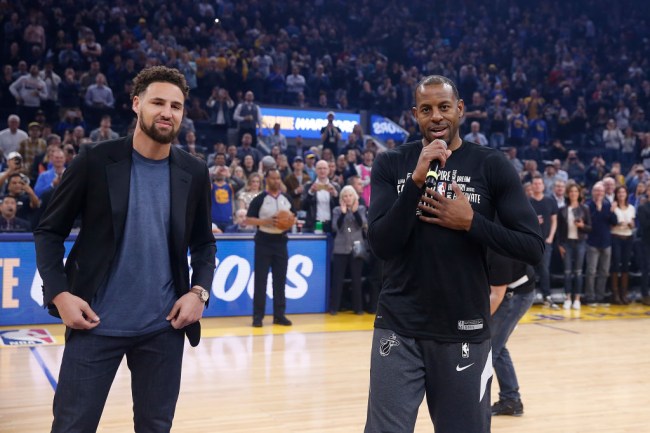 Andre Iguodala made his return to the Bay area on Monday to take on the Warriors for the first time since he was traded to Memphis this past offseason.

Iggy, who recently got dealt to the Heat from Memphis, helped the Warriors win three rings during his time with Golden State which means he received quite the welcome back. A tribute video is pretty standard stuff, but the Warriors took it a step further and had a player come out to center court to say some kind words about Iguodala.

As you would expect, it came down to either Klay Thompson or Steph Curry to grab the mic, but it turns out neither of them really wanted to do it. So, they decided to do a best of three game of rock, paper, scissors with the loser having to go out and honor Iguodala.

Curry ended up sweeping Thompson and was pretty pumped about not having to go talk about his former teammate.

Steph and Klay played rock paper scissors to see who would honor Iggy after his tribute video. pic.twitter.com/K42QrfZUJk

Not that it’s a big deal at all for these guys who have been under the spotlight for years on end, but these guys are human and going to center court and talking about a former teammate in a jam-packed arena probably is a bit awkward.

I’m sure Golden State’s media relations person hates having to go tell these insanely rich hoopers they have to go out and make a speech.

Then again, Thompson and Curry are both out hurt so it probably wasn’t the worst thing to go out and say a few words in front of their fans reminiscing on the past.