Stephen A. Smith Arguing With A Baby Version Of Himself Is The Deepfake To End All Deepfakes 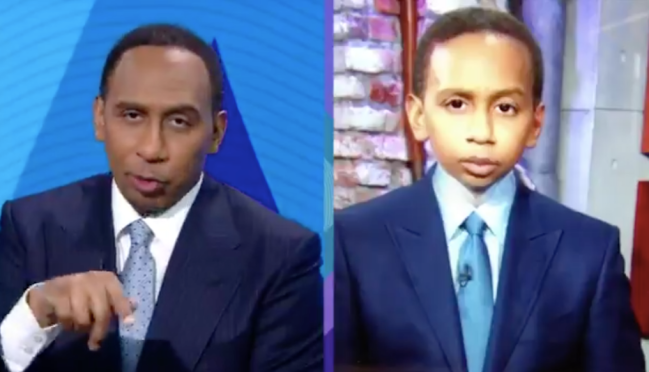 I’ve recently found myself doing a fair amount of reflecting on the realities of inhabiting a world that’s become hopelessly reliant on technology and the possible downsides of the many revolutionary advancements that have transformed modern society only to usually stop ruminating on the topic after getting distracted by something on Twitter.

Over the past few years, deepfakes have taken the internet by storm despite some of the terrifying implications that come with being able to make a video featuring someone doing or saying basically whatever you want them to. While there are some nefarious actors that have used them for cruel and tragic purposes, we’ve also been treated to some cheeky and fun shenanigans courtesy of people who’ve done things like picturing what it would’ve looked like if Sylvester Stallone and Arnold Schwarzenegger had started in Step Brothers and replacing everyone on The Office with Michael Scott.

A couple of years ago, Snapchat rolled out a filter that allowed users to reimagine people as baby versions of themselves, and while I usually try to resist using the phrase “won the internet,” I can’t think of a better way to describe what someone did when they gave Stephen A. Smith that particular treatment.

Who put the the snapchat baby filter on Stephen A Smith ? This is mad wild B ….🤣🤣🤣🤣 pic.twitter.com/0DdUwOfZ3X

The most boisterous talking head in sports eventually embraced the trend himself, and we were subsequently treated to some hilariously altered versions of the argument, rants, and other things of that nature the host has become famous for.

Dropping another episode of Baby Stephen A pic.twitter.com/vQh1ILXYtO

On Monday, Smith unveiled his newest endeavor with the debut of Stephen A’s World, a solo venture that he’ll be hosting four times a week on ESPN+. The inaugural installment featured the impassioned diatribes and Hot Takes we’ve come to expect from the personality as well as a couple of guests, and while Snoop Dogg and Steve Harvey did their best to bring some entertainment to the program, neither of them came close to delivering like the meta masterpiece that is “Stephen A. Smith vs. Baby Stephen A. Smith.”

Will technology ultimately be humanity’s downfall? Maybe, but it’ll be a pretty sweet ride up until that point thanks to things like this.