Stephen A. Smith Won’t Talk Or Joke About Kwame Brown After Brown Challenged Him To A Fight 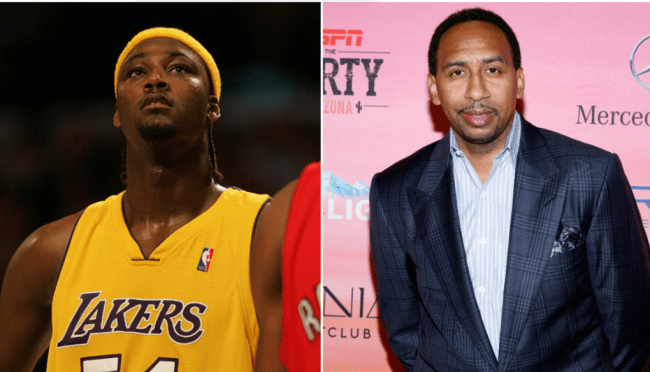 ESPN’s Stephen A. Smith wants no part in responding to an angry Kwame Brown.

The former number one overall pick in the NBA draft has been the butt of jokes for years and was once viciously mocked by Stephen A. in a classic rant that has replayed hundreds of times on TV.

(2008) @StephenASmith's reaction to the Lakers trading Kwame Brown will never, ever get old.

"Kwame Brown is gone .. throw a parade whether you win a championship or not. This man was a bonafide scrub." pic.twitter.com/fHQv69RQNm

Brown has clearly had enough with the jokes and has been spent the past week firing back at people who have recently mocked him in the media. On Tuesday, Brown took to social media to rip into Stephen A. and even challenged the ESPN host to “mutual combat.”

“A 17, 18-year-old kid and you walk around like you’re a big tough man, you were going to college campuses speaking on teenage kids, and your only talent is knowing a bunch of big words and talking disrespectful to the children…Stephen A you bald forehead motherfucker, I don’t know why you got people thinking you’re tough saying all kinds of shit saying you can come see me, meet me in Seattle where we can have mutual combat and talk like that, it’s going to look like you got a toupee in the front of your head by how hard I’d slap you”

Smith was asked by a fan if he was going to respond to Brown and said he had no intention of doing so.

I will do no such thing. I will not waste my time. That man is right; he’s been retired for years, yet all of us have been guilty of getting on him from time-to-time. He has every right to speak his mind. Go for it! https://t.co/seSmuGvRqy

Folks! It’s called Big Boy rules the man has been minding his business fir years….taking one insult after another. He’s perfectly entitled to speak out. I have no problem with it. I can take it. Have at it. https://t.co/40eG7J8DdD

Stephen A Smith probably made the right move considering Brown has a reputation of being a bad-ass off the court.

“It took 20 bodyguards to take him and his brother down inside a club.”