Stephen A. Smith Goes MENTAL On Max Kellerman Over Suggesting That Zion Williamson Should Sit Rest Of Season 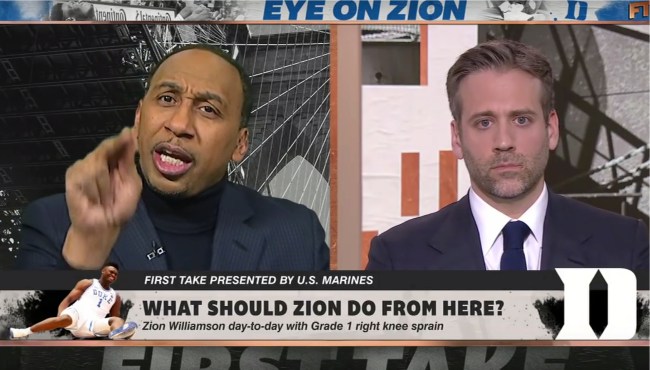 Stephen A. Smith has had his fair share of meltdowns on First Take before — which is one of the reasons why he’s so entertaining in the first place. But what happened today on the popular debate show was one of Stephen A.’s most extreme arguments I’ve ever seen, as he and Max Kellerman went back and forth on the hot topic of Zion Williamson’s injury impacting how the projected No. 1 overall pick in this year’s NBA Draft should proceed with his career with the Duke Blue Devils.

Needless to say, Stephen A. Smith did not agree with what Kellerman had to say. Oh, and did he ever go off about showing it.

With Kellerman arguing that he “doesn’t have a problem with a student being unethical” against the NCAA because of how the organization is run, with no student-athletes getting money for their services, Stephen A. Smith unleashed a rebuttal in true Stephen A. form. Take a look at part of the debate below.

In Stephen A. Smith’s defense, he brings up a solid point. While Kellerman thinks Zion Williamson should do what’s best for him and stick it to the NCAA for how corrupt they’ve always been in profiting from student-athletes, Smith argues that Zion sitting would basically be a slap in the face to his teammates, coaches and school. It’d be him selfishly turning his back on them for the good of his future — which he has every right to do, given some experts think he could profit $1 billion from his hoops careers when all is said and done.

Here’s a quick paraphrase of what Stephen A. Smith also had to add, per FTW.USAToday:

“You are in pursuit of a national title. And you’re just going to walk into the locker room and say ‘yo fellas, it’s been nice. But I’ve proven that I’m going to be worthy of the No. 1 overall pick in the NBA draft. So bye, y’all, y’all have a nice life, and y’all try to win a national without me. I’m going to go and chill until the NBA Draft.’”

“That is egregious. That makes no sense. That’s just unethical…. That opinion, from a team perspective is unethical.”

Zion Williamson’s injury brought so many things to light that it’s no wonder people like Stephen A. Smith are so passionate about their opinions. From some arguing the stud freshman should sit the rest of the year and focus on the NBA, to the NBA already submitting a proposal to change the one-and-done rule, the kid has impacted basketball in a way only he can.

To see the full video of Stephen A. Smith and Max Kellerman’s Zion Williamson debate, take a look below.

See, told you Smith was pretty passionate about how he feels. Toss that man in an ice bath, because he’s got to cool down a bit.