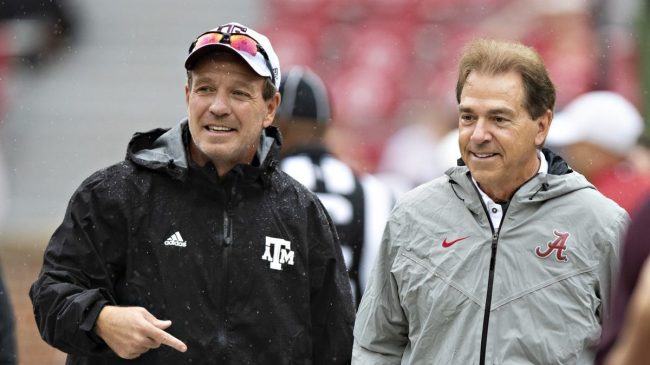 Texas A&M and head coach Jimbo Fisher didn’t have much to remember in the 2021 college football season. One thing the Aggies did have, however, was a shocking 41-38 upset win over eventual SEC Champion Alabama.

The Crimson Tide went on to reach the College Football Playoff, falling to Georgia in the championship game. While Texas A&M finished the year 8-4 and with losses in two of its last three games.

Despite the down year, the Aggies are the talk of the town in 2022. That’s due in large part to a record-breaking 2022 recruiting class.

Texas A&M signed eight five-star recruits in the 2022 class. Much of that success was allegedly due to the implementation of name, image and likeness rules in college sports. Though Fisher denied that notion.

Saban called out Fisher and the Aggies’ recruiting tactics, leading to the Texas A&M coach calling the legendary Bama boss a “narcissist.”

Saban has since apologized and it appears the former friends have buried the hatchet. But that will be put to the test when they meet on the field on Oct. 8.

Smith couldn’t believe what he was hearing and offered an absolutely epic rant in response.

"Texas A&M going to pay big time for all of that bloviating coach Jimbo Fisher did. They in trouble!" pic.twitter.com/rbXs5yCNUJ

“Jimbo Fisher’s at Texas A&M. We know what he brings to the table, mad love and respect for him. 41-38 win over Alabama least. THAT WAS A MISTAKE,” Smith said as Howard struggled to contain his laughter. “Because let me tell you something, when it comes to Tuscaloosa, you understand, after all of that talking to Nick Saban like that, they gon’ get ramrodded. I’m telling you right now, you can plan for the funeral right now.”

Though Fisher and the Aggies may disagree, those in Vegas are in line with Smith. The Crimson Tide are currently 16.5 points favorites over Texas A&M according to DraftKings Sportsbook.

Fisher may want to think twice the next time he takes shots at perhaps the GOAT of college football coaching.