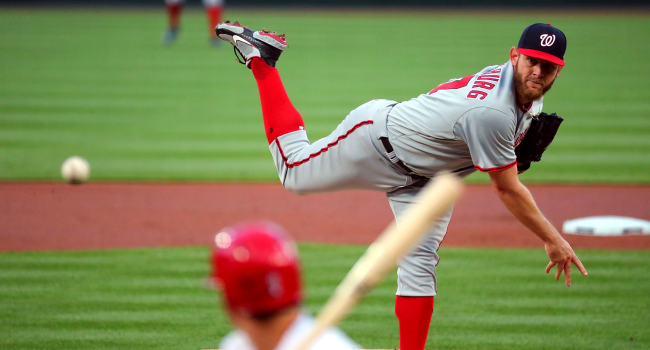 Washington Nationals pitcher Stephen Strasburg and his manager Dave Martinez were angry that TV cameras showed the star in the tunnel during Tuesday night’s game, an area that’s supposed to be off limits.

Strasburg, who struggled versus the Cardinals on Tuesday, allowing eight runs (seven earned) on eight hits and five walks over four innings-plus, appeared to be caught on camera feeling around an area near his neck and shoulder, leading fans and media to speculate that, along with his poor performance, he was dealing with some sort of injury.

Just before the 4th inning, the Cardinals broadcast picked up on Stephen Strasburg feeling around his shoulder/neck area. pic.twitter.com/kjeQxkqdDK

The pitcher, however, was not in the Nationals’ dugout, but rather in the tunnel after giving up an uncharacteristic four runs to the Cardinals in the third inning, an area where television cameras are supposed to be off-limits during games.

After the game, Strasburg told the media, “I just threw a lot of poor pitches. And they made me pay for it.”

He also called the TV camera being trained on him while he was in the tunnel a “joke” and added that ‘there has to be some sort of safe space in the stadium. There have been plenty of other starts where something is not feeling right, and whether you treat yourself or you have a trainer come treat you, it’s just part of the business. I went out there and I gave it everything I had; it wasn’t good enough tonight. There should be some sort of privacy. People don’t watch the games on TV to watch some sort of spy camera watching what the player is doing in the tunnel.”

Strasburg’s manager Dave Martinez, who said the pitcher never mentioned any injury to him during or after the game, was also irked by the perceived intrustion on the pitcher’s privacy.

“Quite honestly, that shot shouldn’t have been shown, so I’m a little perturbed about that,” said Martinez. “It shouldn’t be there. Honestly, that camera, there are rules and regulations about that. It’s not supposed to go down in the tunnel. It’s in black and white.”

Some folks, however, *cough*mostly Cardinals fans*cough* didn’t feel much sympathy for Strasburg and Martinez, viewing their complaints as nothing more than whining.

He was sitting in a chair in plain view of the dugout from the tunnel... Not like someone took a camera into the tunnel itself and started filming

The. clubhouse is a few steps away, or at least the hallway if you need to self-massage, or adjust youorself. It's not a new thing. Excuses.

There is.
The clubhouse. Or down the tunnel a bit. Like every other stadium.

I see the Nats have learned performative outrage. Let's distract everyone with the camera issue to avoid answering questions about Strasburg's shoulder, velocity, or all the runs he gave up.

For what it’s worth, Strasburg does, in fact, appear to be fine on Wednesday.

Stephen Strasburg played catch in LF at Busch Stadium this morning, as he typically does the day after starts. That's only notable b/c there was some commentary on here last night that the Nationals were hiding an injury for him.