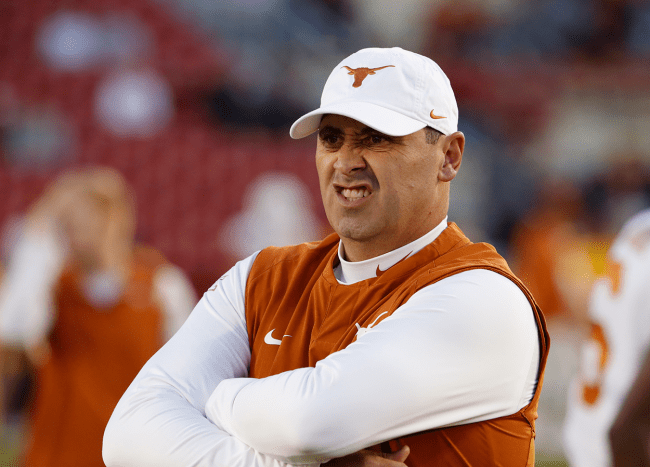 Earlier this week, a video went viral from after Texas football’s blowout loss to Iowa State. In the video, Longhorns defensive line coach Bo Davis can be heard yelling at his players for laughing and joking on the bus ride home.

On multiple occasions, Davis curses profusely toward the players.

Here is the NSFW video in full:

It is unclear as to who filmed the video of Davis’ rant, whether it be a player, coach or otherwise. Regardless of who was behind the camera, he or she sparked some serious controversy.

While many people were quick to pounce all over Davis for his behavior, those people have never played competitive sports, let alone college football.

As is no surprise, Dan Wolken was among them.

On the other side of the spectrum, there were quite a few people, if not the majority, who were quick to defend his passion. Many were upset that the exchanged was filmed in the first place.

I don’t know what the end goal was for whoever recorded/posted the video of Bo Davis on Texas bus after Iowa State, but if it was done in an attempt to make coach look bad, then that backfired in a substantial way!

Biggest “clue” in Bo Davis’ speech that this coaching staff gets it and will turn it around: He said, “I got MY ass kicked today!”He didn’t say “you”or “y’all”- he said “I”. He is taking his share of the blame. It is a damn TEAM game and he knows that. He nailed it 💯! Love Bo!

Bo Davis is a winner. Winners can sniff out losers really quick. pic.twitter.com/MV650wuaUi

If you have a problem with Bo Davis because of that video, football probably isn’t for you.

Whoever recorded Coach Bo Davis doesn’t understand the sanctity of sports/competition and keeping things said in that environment in that space whether that’s the locker room/meetings/bus etc. It shows a lack of awareness/respect and represents how you were raised.

How is this filmed and shared?
I’m giving Bo Davis a standing ovation for his passion and messaging. Can’t imagine coming onto a bus seein dudes laughin on their phones after a no show performance (30-7 loss in Ames)-4th STRAIGHT L & their on the bus smiling?!
Bo lettin em know! https://t.co/g2ixQ0F78K

1. That a player filmed it and then put it out.

2. That there wasn't already a player on the bus doing it so a coach didn't have to

Head coach Steve Sarkisian responded to the video on Thursday and was very clear about what he thought. He loved the passion.

Sark on Bo Davis video: "I think one thing that jumped out to me when I first saw the video, you could hear the passion in Bo’s voice. We really believe in the staff that we hired and what we came here to do. You could feel the passion and want to get it done."

Sarkisian even went so far as to say that he was encouraged that the Texas program now has “men that stand for what we believe in. We’re here to build the culture that we want.”

He did not see it as even one iota of a distraction.

Sark didn’t view the Bo Davis video getting out as a distraction.

“This is football. This is an emotional sport.” #HookEm

However, he did not love that the video leaked in the first place.

“It’s unfortunate that a young man decided to do that,” Sarkisian said.

Good for Sarkisian. In a world where it is often easier to succumb to public pressure, he is standing by his staff.

Texas will now turn its attention to an abysmal Kansas team on Saturday. It will need to beat two of three remaining opponents to reach bowl elgibility: the Jayhawks, West Virginia and/or Kansas State.