Bizarre, 45-Second Long Question At Texas Football Press Conference Is Straight Out Of An SNL Skit 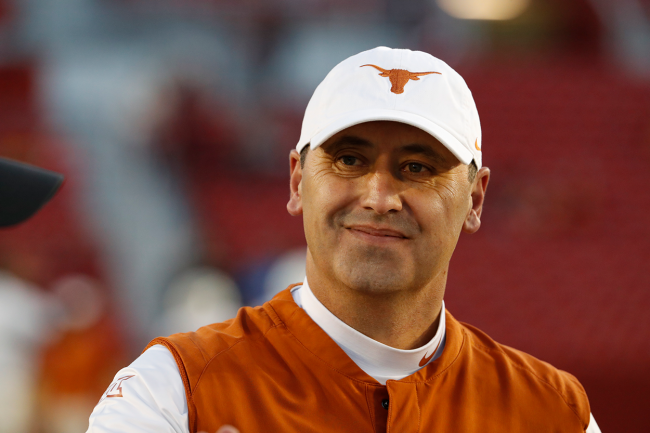 The 2021 University of Texas football season has quickly become one of the most entertaining storylines in the country. After beginning the season ranked in the preseason top 25, the Longhorns are currently 4-6 with wins over both West Virginia and Kansas State required to reach a bowl game.

Safe to say, first-year head coach Steve Sarkisian’s first year has not gone as planned or expected. It’s a nightmare.

Not only is Texas unable to get the results it wants on the field, but the school has become a laughing stock around the country. Its own recruits are literally laughing at the program from the stands.

To make matters worse, Sarkisian has no idea whether his team is listening to him or not.

Texas football coach Steve Sarkisian was asked if players have tuned him out. Sarkisian said, "I don't know. You'd have to ask them that question."

Oh, and he is throwing his current players under the bus, saying that he expects sweeping roster changes during the offseason.

Steve Sarkisian on roster turnover: "I could easily see us with 33 new scholarship players on our team by next fall."

Faster than anybody could have expected, to be quite frank.

Although Sarkisian’s No. 7 recruiting class is still in tact at the moment and there is a high probability that things will start to turn around (at least to some extent) next season, this year is a dumpster fire. It’s incredibly entertaining to watch unfold and closely resembles a spoof, alternate version of Texas football whose plot has been written by the top comedy writers.

Even the press conferences are getting strange. During Monday’s media session, a reporter asked Sarkisian one of the most bizarres questions that you will ever hear.

After watching the 45-second question, you will have no idea what you just listened to. Take a look:

Sarkisian is very clearly baffled by what is being asked of him and his guess is as good as ours. WHAT?!