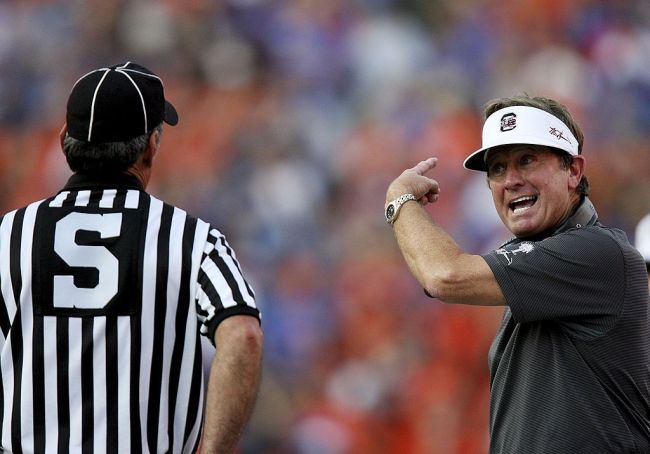 Steve Spurrier is an equal-opportunity offender, even in retirement.

In response to the recent news of Texas and Oklahoma withdrawing from the Big 12 to apply for SEC membership, the former Florida and South Carolina cooked up some zingers.

“I can understand Texas jumping over,” Spurrier said. “They get to play Texas A&M again. They get to … they can’t win the Big 12 anyway.

On Oklahoma, transcribed by For the Win:

“I’m sort of surprised Oklahoma,” Spurrier said. “I just don’t think they’re going to come over to the SEC and win with any regularity the way that they win the Big 12. Their fans might say, ‘Yeah, now we can beat Alabama and LSU and all these dudes.’ It may not happen like that.

Texas & Oklahoma, do not sulk. You are far from the only casualties in Spurrier’s Cemetery.

“In 12 years at Florida, I don’t think we ever signed a kid from the state of Alabama. Of course, we found out later that the scholarships they were giving out at Alabama were worth a whole lot more than ours.”

On a fire at an Auburn dorm that burned 20 books:

“The real tragedy was that 15 hadn’t been colored yet.”

In response to a 1994 scandal in which FSU suspended four players (including Derrick Brooks) for going on a $5,900 shopping spree at a Tallahassee Foot Locker courtesy of a sports agent hopeful:

“You know what FSU stands for, don’t you? Free Shoes University.”

“I sort of always liked playing them that second game because you could always count on them having two or three key players suspended.”

In response to his difficult stint in the pros:

“There are no Vanderbilts in the NFL.”

Get this man back on TV.