Stewart Cink Shares How Ruthless Fans Can Be To Bryson DeChambeau, Patrick Reed 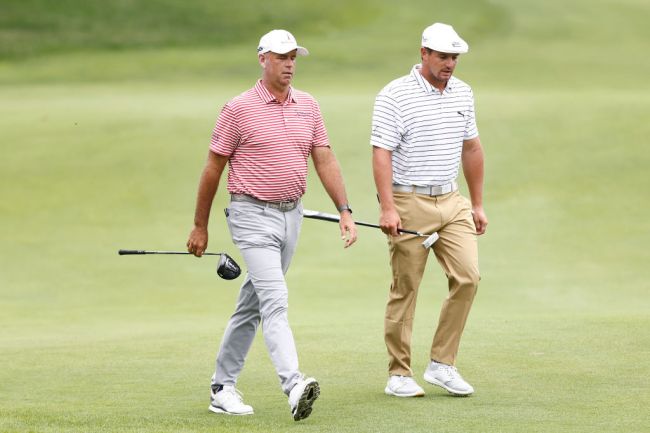 Fans heckling both Bryson DeChambeau and Patrick Reed has been well-documented. It’s no secret that both Reed and DeChambeau are among the two most disliked players on the PGA Tour. Having said that, fans at home don’t hear anything and everything shouted at these guys. Viewers only hear about the heckling when it happens on-air or through social media when someone decides to report on it.

The most recent example of this was a fan shouting ‘Great job Brooksie‘ at DeChambeau following his playoff loss to Patrick Cantlay at the BMW Championship. ESPN’s Kevin Van Valkenburg witnessed the exchange between the fan and DeChambeau, who shouted back ‘You know what? Get the f-ck out.’

Those who tee it up with Reed and DeChambeau are the ones that truly get to witness the full barrage from the fans.

Stewart Cink Is Surprised Nobody Has Been Killed In The Gallery

Stewart Cink has played quite a bit of golf with both Reed and DeChambeau this season and addressed just how ruthless fans can be toward the two during his press conference ahead of this week’s Tour Championship in Atlanta. For anyone thinking that fans don’t actually dish out a lot at these guys, Cink’s comments will probably change your perspective on that.

“Now, this year I did play a lot of golf with Patrick Reed and I played quite a few rounds with Bryson, and so it’s a little different hearing the two personalities of the fan group with those two guys, but I did hear some pretty astonishing things when I played with Patrick, and I love playing with Patrick Reed,” Cink explained. “He and I just laugh about it when we hear it and I can’t believe that there hasn’t been a murder yet in the crowd.”

“But it’s pretty intense. I think in the end the fans sometimes just like to hear themselves and they like to be able to yell out something and then poke their buddy and say, Did you hear me? I said something like that, you know? And, you know, it’s maybe a little childish, but I think the players out here don’t get too wrinkled by it necessarily because it’s not really a personal thing. I think in a one-on-one situation those fans that yell probably wouldn’t be quick to say those same things in a one-on-one situation.”

As for ways the PGA Tour plans to combat these instances, specifically the ‘Brooksie’ shouts at DeChambeau, commissioner Jay Monahan announced on Tuesday the behavior won’t be tolerated.

Monahan says that the "Brooksy!" calls are "disrespectful" and, per the Tour's updated fan conduct policy, will no longer be tolerated and could lead to expulsion from a tournament.