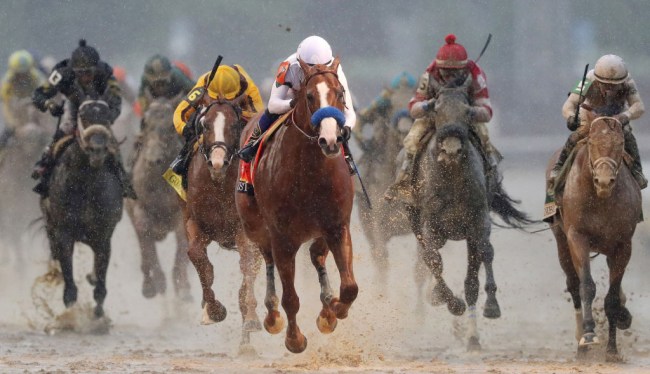 Hardcore gamblers are a cold-blooded bunch and for definitive proof of that we only need to hear this wild story of how a guy was able to turn a $500 Kentucky Derby bet into $150,000.

At Churchill Downs on Saturday, 3 to 1 favorite Justify won the with a time of 2:04.20 and became the first Kentucky Derby since Apollo in 1882 who hadn’t previously raced as a two-year-old.

If you placed a bet on Justify at those odds you probably didn’t make a lot of cash. However, if you happened to get a Kentucky Derby futures bet down on Justify before he ever won a race, say four days before he broke his maiden, you could have gotten 300 to 1 odds. Which is exactly what one gambler did, with a cold-blooded twist.

Saturday, Bill Krackombergery of Gaming Today tweeted a picture of a Kentucky Derby betting slip showing Justify at 300 to 1 odds with a link to the wild story behind the ticket.

There is a lot more to this ticket then it looks like. I covered a little of it in my weekly column in gaming today. https://t.co/EEPmvGQyO7 pic.twitter.com/xNh8DTsc4H

One of my buddies received a call four days prior to the race in which Justify broke his maiden. He was told, “Bob Baffert (trainer) thinks he has a monster of a horse and will point him toward the Kentucky Derby if everything goes correctly.”

Now my friend puts a claim in to his “friend” and says, “Hey, I told you about that horse, I deserve a piece of that ticket.” But the other guy claims he got a call the next day with the same horse and that is why he made the bet.

On one hand, the guy who thinks he deserves a piece of the bet had every opportunity to make his own bet at those long odds. And on the other hand, if the guy really did use the tip he heard to win that money he should probably give his “friend” at least a little cut of the winnings.

The lesson here? If you hang out with a bunch of horse racing gamblers and you share a hot tip with them, just assume the only way you’re getting paid is if you actually use the tip to make a bet for yourself.