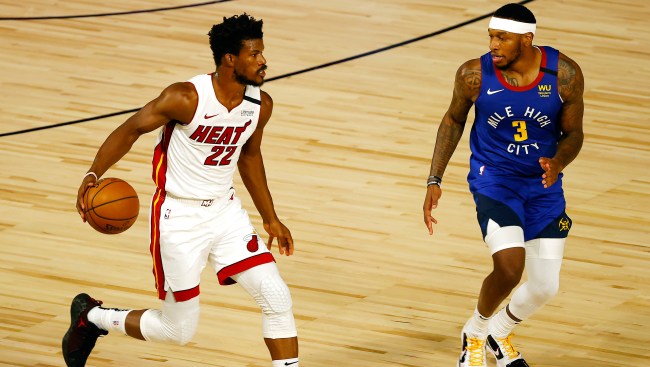 As Jimmy Butler took the court for warmups prior to the Miami Heat’s bubble opener versus the Denver Nuggets he was wearing a jersey with no name on it. Nor did his jersey have a social justice statement on it in place of his name, like numerous other NBA players have chosen to do as the season got restarted.

While others were submitting requests to have things like Black Lives Matter, Vote, Peace, Equality, Freedom, and 24 other statements that were approved by the league, placed on the backs of their jerseys, Butler asked the NBA if he could just leave his blank.

“I love and respect all the messages the league did choose, but for me, I felt like with no message, with no name, it’s going back to like who I was if I wasn’t who I was today,” Butler said about his unique request. “I’m no different from anybody else of color, and I want that to be my message, in the sense that just because I’m an NBA player, everybody has the same rights no matter what. That’s how I feel about my people of color.”

The NBA said no.

Jimmy Butler says he won’t wear anything on the back of his jersey. Not even his name. Wants it blank as his own social justice message. He feels like it represents who he would be if he weren’t a basketball player. pic.twitter.com/2I4vJUpL7x

Butler, however, had his blank jersey made anyway and despite the fact that the referees made him change out of it before the game tipped off, he was still able to make his statement.

Interestingly, the Heat, the NBA, and commissioner Adam Silver all knew he was going to do this before it happened.

“We have the best leadership in professional sports between [NBA commissioner] Adam Silver and [National Basketball Players Association executive director] Michele Roberts,” Butler’s agent Bernie Lee explained to the Miami Herald on Tuesday. “For a few weeks leading into the first seeding game, we spoke about Jimmy’s choice often and the outcome you saw was the product of those conversations.

“While it’s not exactly what anyone wanted at the outset, the outcome was reflective of the times and how adaptable everyone has to be. I think Jimmy was provided a platform and opportunity to make a statement that was very important to him and powerful.”

Butler later posted a photo of himself rocking the blank jersey with the caption, “Do not get lost in a sea of despair, be hopeful, be optimistic. our struggle is not the struggle of a day, a week, a month, or a year, it is the struggle of a lifetime. never, ever be afraid to make some noise and get in good trouble, necessary trouble. – John Lewis.”

do not get lost in a sea of despair, be hopeful, be optimistic. our struggle is not the struggle of a day, a week, a month, or a year, it is the struggle of a lifetime.  never, ever be afraid to make some noise and get in good trouble, necessary trouble. – John Lewis 📸 @mister_pierce