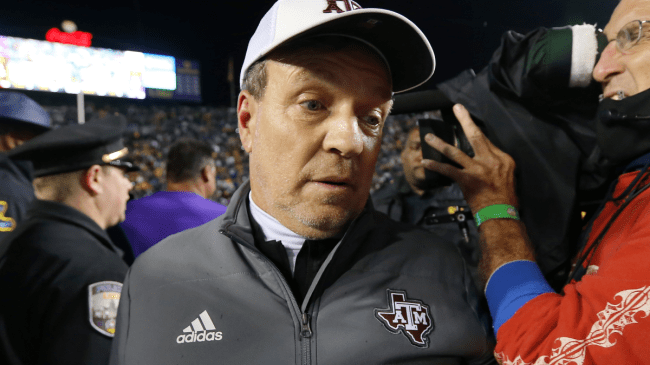 Jimbo Fisher appears to have lost complete control at Texas A&M. The head coach has dropped three straight games, while also recording an embarrassing defeat to Appalachian State earlier in the season. The Aggies paid the Mountaineers $1.5M for that loss.

Fisher’s team now sits at 3-4 on the year, and 1-3 in SEC play. After entering the season with conference title hopes, the Aggies are now staring down the barrel of a potential losing campaign. They finish their slate with matchups against Ole Miss, Florida, Auburn, UMASS and LSU. With the way they’ve been playing of late, it’s hard to find three wins.

And things got a bit more difficult on Monday.

Rumors began to swirl about pending suspensions being handed out to a trio (and possibly quartet) of high-ranking freshmen. Those players were all feature prospects in A&M’s historical ’22 recruiting cycle that ranks as the best of all-time.

The rumored/alleged cause of those punishments started being shared on social media.

Texas A&M players rumored to be suspended due to incident in locker room before the loss to South Carolina.

The three freshmen named in the report were Denver Harris, PJ Williams, and Chris Marshall. All were rated as top 100 players in last year’s recruiting class, and all were making impacts on the field in 2022.

Williams, an offensive lineman, had made one appearance this year. With the Aggies recently losing three linemen to season ending injuries, his chances of playing could’ve increased. Marshall had made a pair of starts at wide receiver, hauling in 11 catches for 108 yards this season. Harris, a defensive back, had recorded 14 tackles.

None recorded stats last week and now their futures in College Station could be in question.

That same uncertainty now surrounds Jimbo Fisher, too. The production has obviously been missing on the field as the team currently sits below .500. Fisher’s saving grace was that top-ranked recruiting class. Should that begin to unravel, too, there’s not much else keeping the head coach tied to the program.

Yes, there are 85 million reasons why the Aggies would hold on to Fisher, but if anyone can afford to pay the price, it’s A&M.

Fans are calling for an end to the Jimbo Fisher era.

Many on social media just want the relationship to end. Fisher has largely failed to produce on the field, never notching more than nine wins in a season. This year is tracking to be his worst season yet, signaling a perfect time for the Aggies to start fresh.

Here’s what folks are saying online after hearing the latest rumors.

Steven Willis of Locked on Ole Miss said, “Also hearing stuff about the A&M locker room being fractured between young and old players. Lots of A&M people are volunteering this info which indicates this is a worse situation than we know.”

Also hearing stuff about the A&M locker room being fractured between young and old players. Lots of A&M people are volunteering this info which indicates this is a worse situation than we know. Honestly the worst thing for A&M was Ole Miss losing to LSU. No trap game now.

That surely insinuates that Fisher has lost the locker room. That lack of control has many wondering if it’s time to move on.

This person wrote, “If Jimbo is not winning games, not developing QB’s, his offense is outdated, and he can’t control his high-priced freshmen what value does he bring to the table?”

If Jimbo is not winning games, not developing QB's, his offense is outdated, and he can't control his high priced freshman what value does he bring to the table?

Texas A&M’s fully guaranteed $95M deal with Fisher is quickly looking like the dumbest agreement in college football. If Fisher is unable to right the ship, his days on the sidelines could be numbered.