Takeaways from UFC 270: Will Ngannou Stay With the UFC? Figueiredo vs. Moreno 4 A No Brainer 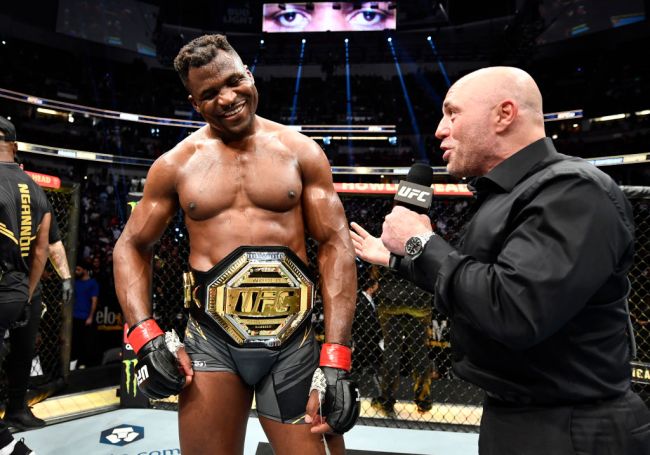 With Gane winning the early rounds on account of his slick Muay Thai style and clinchwork, Ngnnaou battled back in the later frames. Using powerful slams and a grinding wrestling approach, Ngnannou moved from half guard to full mount throughout the 25-minute contest, slowing the challenger down in the later rounds to hold on to the title.

It was an unexpected gameplan from a fighter known for vicious and quick knockouts, but an effective one nonetheless.

With an expiring UFC contract, Ngannou is entering uncharted territory. Suddenly, the conventional narrative of facing up-and-coming challengers has been blown wide open in favor of a new contract, along with a crossover fight against WBC heavyweight champ Tyson Fury. Even a potential fight with longtime light heavyweight champion Jon Jones, who has been contemplating a move up to heavyweight for years, seems to be on ice, as Ngannou exercises his leverage. It’s really a fascinating story.

Ngannou’s future with the UFC remains the biggest takeaway from UFC 270. Not since B.J. Penn in 2004 has a reigning UFC champion walked away from their belt to pursue combat opportunities outside the Octagon. If Ngnannou opts to leave in favor of a boxing career or myriad combat sports options, it would be a landmark moment in the UFC.

Not only the UFC heavyweight division and Jon Jones, but also the entire mixed martial arts world, awaits the result of Ngannou’s contract situation. The future of the division, and MMA labor disputes, hangs in the balance.

Deiveson Figueiredo vs. Brandon Moreno Will Be the UFC’s First Quadrilogy

With Figueiredo winning a unanimous decision in the UFC 270 co-main event, the scene is now perfectly set for a fourth fight, as the pair have battled two a 1-1-1 record in head-to-head competition over the last 14 months.

Their back-and-forth fight lit the Honda Center crowd on fire. Every time Figueiredo landed devastating shots, Moreno answered with attacks of his own. Moreno was largely on the offensive throughout, throwing strikes in volume, tagging the new champ in the pocket. But Figuieredo landed devastating leg kicks early, and dropped Moreno in the third round.

What amounted to a predominantly standup fight, the trilogy between Figueiredo and Moreno once again proves that these two are perfect dance partners who deliver incredible action inside the cage. They’re everything fans want to see in an MMA fight, and they’re destined for a fourth bout later this year to settle their historic rivalry.

Michel Pereira Is Must See TV

The UFC 270 card may not have been the promotion’s deepest, but main card competitor Michel Pereira seized his opportunity to fight just before the night’s two title fights, delivering a spectacular performance against Andre Fialho.

Investing in body work by attacking Fialho’s midsection with kicks early, Pereira found his form in the second and third rounds, rattling off wild combinations, flying knees, and even a somersault Rolling Thunder kick.

It was both an entertaining and technical performance from Pereira, who may be on his way to a top-15 ranking following UFC 270. And wherever he lands in the new rankings, Pereira has cemented his place as PPV draw, or Fight Night headliner, from here on out.

Heading into UFC 270, there was plenty of talk about the depth of the card and a lack of stars and ranked fighters.

While the lack of depth could definitely be felt, the two title fights at the top of the card were no doubt a draw, and both delivered their fair share of action.

It may not have been the UFC’s greatest blockbuster, but UFC 270 was a solid way to kick off the UFC’s 2022 PPV campaign. And seriously, if this is what they’re promoting in January, imagine what kind of cards we’ll see towards the end of the year.