QB Tate Martell Has Entered The Transfer Portal, Again, Hoping That His Fifth School Is The Charm 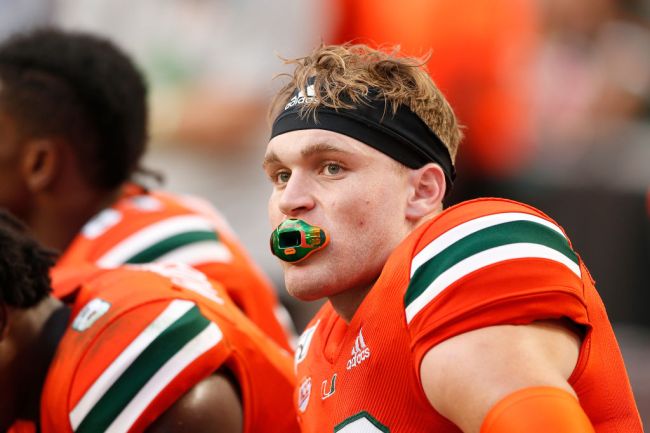 It has been a wild collegiate journey for Tathan Martell, better known as Tate. He is headed to his third school in five years after entering the transfer portal on Wednesday and will look to commit to his fifth school since 2014. Martell, who spent the past two seasons at Miami, was a four-star recruit in the 2017 class out of Bishop Gorman High School in Las Vegas, one of the nation’s top football powerhouses. He was featured on the reality documentary QB1: Beyond the Lights, which put his recruitment heavily in the public eye.

Martell garnered even more attention as his decision played out. First, he committed to play for Steve Sarkisian at Washington as a 14-year-old in 2012, only to decommit in 2015. He verbally committed to join Kevin Sumlin at Texas A&M later that year, but it didn’t hold. Come May of 2016, Martell flipped to Ohio State to play for Urban Meyer. It was an up-and-down process that ended with him in Columbus.

That didn’t last long either. He redshirted during his true freshman season with the Buckeyes and lost the starting job to Dwayne Haskins in 2018. Come year three, Martell was set to compete with Justin Fields, who had just transferred in from Georgia. He didn’t take too kindly to the former Bulldog and sent out a cryptic tweet that has since been deleted:

… especially not your second time

Even before the news broke of Fields’ transfer, he addressed the rumors and remained adamant that he was not going anywhere.

“Why would I leave for someone who hasn’t put in a single second into this program?” he said. “To just run away from somebody who hasn’t put a single second into workouts anything like that and doesn’t know what the program is all about, there’s not a chance. I will [be the starting quarterback]. I am 100 percent sure on that. I am not just going to walk away from something that I have put so much time into and there is not a chance that I won’t go out there and compete for that.”

Less than two weeks later, he entered the transfer portal and left to be the top guy at Miami. That did not end up being the case.

Martell was ultimately named the third-string behind Jarren Williams and N’Kosi Perry in 2019. He played sparingly at slot receiver, attempting only one pass. His chance to start in 2020 quickly dwindled to zero as D’Eriq King transferred in from Houston and became a dark horse Heisman Trophy contender. Martell chose to opt out of the season amidst the COVID-19 pandemic.

With the NCAA’s blanket waiver that granted all athletes an additional year of eligibility last season and his redshirt season in 2017, Martell should have two years remaining at whatever school he chooses to play for as a graduate transfer. He posted an emotional message on Twitter after his decision was announced.

this is where i’ve been.. pic.twitter.com/bcAjdXU23q

Initial belief is that he will head home to Las Vegas and play at UNLV. No matter where he ends up, here’s to hoping that the third (fifth?) time’s a charm.