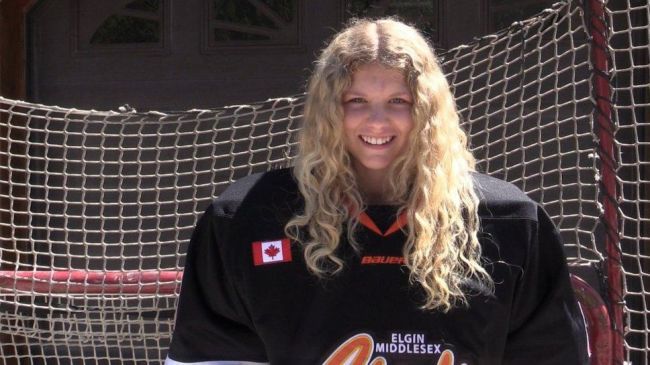 Taya Currie made history on Saturday and became the first female to be selected in the Ontario Hockey League Priority Selection draft. The 16-year-old goalie from Parkill, Ontario was drafted with the No. 267 overall pick by the Sarnia Sting and she’s a beast.

Currie grew up playing in a youth hockey program that had a mix of boys and girls. As the girls began to switch over to girls only programs, she stayed in the boys league. The hitting didn’t affect her as a goalkeeper and nobody could score on her— no matter the gender.

The 5-foot-7 brick wall most recently played for the Elgin-Middlesex Chiefs. The same minor league hockey team produced Bo Horvat, Boone Jenner and Travis Konecny and all three were drafted into the OHL. Currie now adds to that lineage and it’s easy to see why. She’s an absolute force in net.

The Sarnia Sting drafted TAYA CURRIE 267th overall. Congrats Taya on being the first ever female selected in the #OHLDraft! @StingHockey @U16Emcpic.twitter.com/DMj3KVZV4R

The Sarnia Sting was the junior home for a long list of professionals and Currie will look to follow suit. Along with fellow minor league alumnus Konecny, the likes of Steven Stamkos, Alex Galchenyuk and many others moved through the program.

Women in a men’s league.

It is a long road from the OHL Draft to the NHL Draft. However, Currie is now in the pipeline. Only one woman has played in the NHL. Manon Rheaume suited up in exhibition games for the Lightning in 1992 and 1993, and most recently Shannon Szaboados dressed for a game with the Tri-City Americans of the Western Hockey League in 2003.

Both women congratulated Currie on her historic selection.

Congrats Taya! Watched this live. Cant wait to watch you on the World stage one day 🙌🏼

Currie is four inches shorter than the smallest goalie in the league this year, so she has an uphill battle. However, this historic step forward echos with significant magnitude across the hockey landscape.