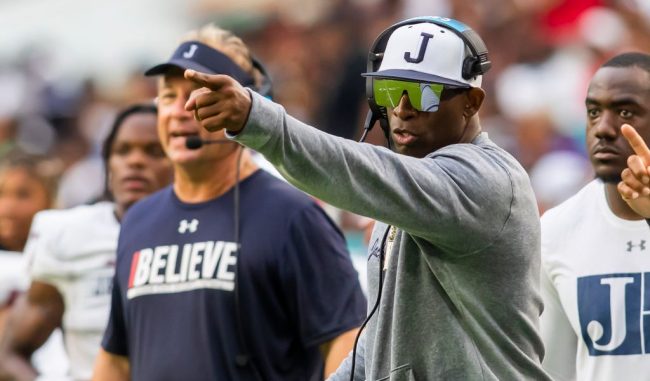 Texas Christian University football is in the middle of its first coaching search in more than 20 years. With a lot of speculation surrounding who might be available for the opening, one of the Horned Frogs players has made his opinion very clear.

Running back Zachary Evans, who was TCU’s first-ever five-star recruit and has quite the backstory, weighed in on who should be the next head coach. He wants Coach Prime.

Deion Sanders is currently in his second season as the head coach of Jackson State. When he took over the Tigers program ahead of the 2020 season, it was not only a big move for the school, but it was fairly unprecedented.

Sanders, an NFL Hall of Famer and former two-sport athlete, is one of the greatest to ever play his position and football as a whole. However, he has only been coaching since 2012.

In 2017, he became the offensive coordinator for one of the top high school programs in Texas. He served in the OC role at Trinity Christian High School, where he coached his sons Shilo and Shedeur, until 2020.

And then Jackson State came calling.

It was a monumental move across college football and it quickly brought results. Sanders signed the top recruiting class on the FCS level in his first year and inked nine transfers from Power 5 programs.

He also flipped the nation’s top JUCO defensive back away from Georgia and another recruit away from Florida. Additionally, Sanders brought his son Shedeur in at quarterback to run the offense.

Although Year 1 was a learning process and hindered by COVID-19, Sanders immediately made a statement with some big wins and did so in style. Now, in Year 2, Jackson State is currently 8-1, first in the SWAC East and primed to make a deep run into the FCS playoffs.

Sanders, however, has been absent from the team for the past three weeks due to medical issues. He was released from the hospital earlier this week and was at practice on Wednesday.

According to the Ft. Worth Star-Telegram, Sanders is “squarely in the mix” for the job. The publication reported that Sanders interviewed for the job on Monday.

“I’m not saying he is going to get the job, not saying he’s the leading candidate at this point,” an unnamed source close to TCU’s selection committee told the Star-Telegram. “But he is in the mix. He was impressive.”

Sanders has not addressed the TCU opening with the media or his players.

“We don’t address it because the players did a good job of impressively not even flinching,” Harrell said. “There were no conversations about it. The staff heard about it. We know Coach Prime was pretty much in the hospital and don’t know how that can happen.

Along with Sanders, Sonny Dykes, Billy Napier, Tony Elliott and Matt Campbell are considered to be the five top candidates. We know who Evans wants, and his tweet mentioned “we,” so he is clearly not alone.