There Are Reportedly 3 ‘Leading Teams’ In The Mix To Sign J.J. Watt 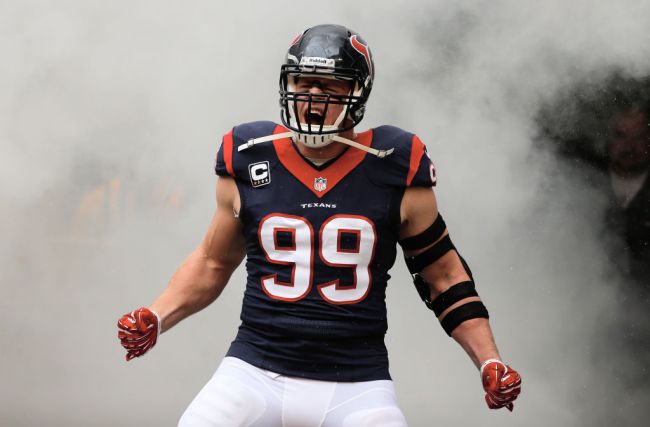 J.J. Watt hasn’t been a free agent for long, but at this point, it’s as if just about every team in the NFL is a ‘contender’ to sign the five-time Pro Bowler. That’s just how rumors work in the league, especially when they involve a superstar like Watt. Every team in the league would like to add Watt to its roster, but it’s going to come down to which team Watt wants to sign with.

Watt was immediately linked to the Steelers after the Texans shockingly decided to release him due to the fact that his brother T.J. and Derek play for Pittsburgh, but according to NFL insider John Clayton the Steelers won’t be signing him.

According to Clayton, there are three teams above the rest of the league that are in the mix to sign the soon-to-be 32-year-old: the Titans, the Bills, and the Packers.

Clayton shared this news during an appearance on 93.7 The Fan in Pittsburgh but took to Twitter moments after to further explain the situation. Green Bay, Buffalo, and Tennessee are in the lead at the moment, but there are a ‘dozen teams’ still in on Watt as well.

People are misinterpreting what I said on radio today. I said Tennessee, Green Bay and Buffalo were the leading teams for J.J. Watt but not the final three. Watt hasn't narrowed his list. The Cleveland Browns are still in. So are the Raiders. He has a dozen teams after him.

Watt is from Wisconsin, so the link to the Packers makes a lot of sense. Plus, who wouldn’t want to go play for a team that’s led by Aaron Rodgers? It also wouldn’t come as a surprise to see Watt sign with the Titans given his history with head coach Mike Vrabel, who was Watt’s defensive coordinator for some time in Houston. Then you have the Bills, who are legitimate contenders in the AFC and could compete for a Super Bowl for years to come with Josh Allen under center.

I don’t think anyone would argue that the Bills and Packers are a slight step ahead of the Titans if you wanted to rank those three teams in terms of contender readiness. Tennessee’s defense last season was abysmal, maybe Watt wants to go somewhere where he would be ‘the guy,’ or maybe he wants to go to a team with a roster more primed to win a Super Bowl right now.