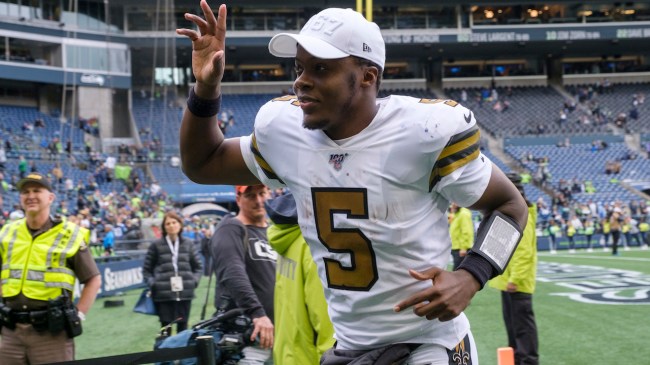 Despite being 5-point underdogs heading into Sunday’s game, the New Orleans Saints rolled into Seattle this past Sunday and handily beat the Seahawks (the final score of 33-27 did not reflect that actual pattern of the game).

Without star quarterback Drew Brees for the next six weeks, the Saints were forced to turn to backup Teddy Bridgewater, who had yet to win a regular-season start following his horrific knee injury with the Minnesota Vikings years ago.

Back in the summer of 2016, Bridgewater suffered a knee injury so gruesome that his surgeon Dan Cooper described it as “the worst knee dislocation in sports I’ve ever seen.” And yet, here we are, over three years later, and Bridgewater is back starting for an NFL franchise.

If anyone understands the magnitude of Bridgewater’s comeback, it’s Bridgewater himself, who gave an emotional speech to the rest of his Saints teammates following their Week 3 victory (Bridgewater started Week 17 of the 2018 season, but that game ended in a home loss to the Carolina Panthers).

“Hey man, I just want y’all to do one thing, man. I’m trying not to bawl right now. But, man, cherish this moment, man. Cherish these opportunities that we got. Cherish this feeling of winning, and just, man, never take it for granted. Hey, I’m so speechless but man, I would not have rather been anywhere else than here, experiencing this right now in this moment with you guys. So, man, I appreciate you guys, man, for accepting me, and man, I love y’all,” Bridgewater said to his teammates in the locker room following the Saints 33-27 victory over the Seahawks.

While Bridgewater may sound like a quarterbacking Jon Gruden with all of those mans in his vernacular, it’s tough not to be moved by the moment, as Bridgewater — who comes across as an extremely humble and likable dude — is visibly emotional about how difficult his long road back has been and how simply happy he is to bere here.

The NFL can be a divisive topic these days, but it’s moments like these that remind us of the human aspect of the sport that we’ve come to adore so much.