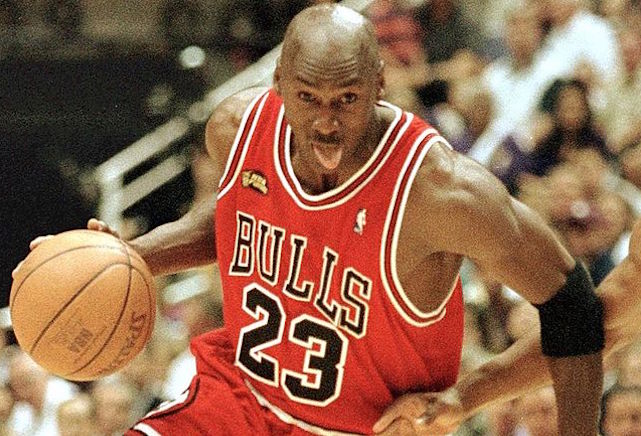 Michael Jordan is possibly one of the most competitive people to ever walk the Earth, and as we’ve learned time and time again over the years, the last thing you want to do if you find yourself facing off against him in any realm of life is call his greatness into question, as doing so is basically like walking into a lion’s den draped in the meat dress Lady Gaga wore to the MTV Video Music Awards.

MJ is not the kind of man who likes to lose—whether we’re talking about a basketball game, a high-stakes round of golf, or an argument with his ex-wife—and suggesting he might not be the master of any domain he’s convinced himself he reigns over will almost always result in you regretting that decision.

Over the past few weeks, The Last Dance has given us plenty of insight into the mentality that helped Jordan become one of the most dominant players the NBA has ever seen, and in the most recent episode, we were provided with an absolutely fantastic moment when he took a look at a clip of Gary Payton saying he’d figured out the secret to guarding the legend when the Bulls took on the SuperSonics in the 1996 NBA Finals—a claim that made MJ literally laugh out loud.

Gary Payton thought he found a way to get to MJ … Mike wasn't sweating the Glove 😂 #TheLastDance pic.twitter.com/Z8NG7qN5hW

Payton said he set out on a mission to do everything in his power to tire out Jordan, and while it seemed like a fairly effective strategy despite the fact that Seattle ultimately lost the series, another guy claimed he cracked the code a couple of years earlier in the form of a random kid who got the chance to play some pick-up ball back when the superstar was staying sharp in his first retirement by occasionally dropping by a rec center in Chicago.

The teenager in question was Aaron Watkins, who was interviewed by a local news station after playing with Jordan in 1994  and said the key to shutting MJ down was to prevent him from driving to the lane, claiming his outside game was his biggest weakness.

Watkins had a pretty good point, as Jordan shot a fairly average 32.7% from behind the arc during his professional career, but as he repeatedly proved over the course of his playing days, keeping him out of the paint was much, much easier said than done.