Baseball Coach Throws Epic Tirade, Gets Ejected In College World Series Loss, All Because Tennessee Is Cursed By Peyton Manning 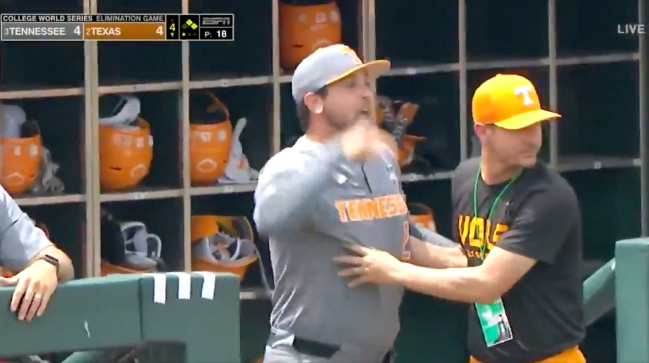 Tennessee baseball assistant coach Ross Kivett was arguing balls and strikes in Tuesday’s elimination game at the College World Series and got tossed. The reaction that followed was all-time. He flipped his lid, threw a binder and had some very choice words for the umpire.

Vols ass't coach Ross Kivett absolutely lost his s*** at one of the umpires and was tossed, he wanted to fight pic.twitter.com/x7Ia23FOLX

Tennessee assistant Ross Kivett has been tossed from the game. Then left them a mess to pick up. #CWS #Vols pic.twitter.com/k0mncKYKqS

Kivett is listed as the volunteer assistant coach and camp coordinator on the UT site. He also probably coaches one of the bases.

The Vols lost to the Texas Longhorns 8-4 and are eliminated. I live in Tennessee and Peyton Manning was trending after being at the game in Omaha.

I clicked on the topic and here is what I found. Apparently there is such a thing as a Peyton Manning curse. I guess it means getting close but not ever winning a ring? I don’t really get it because he has one, but whatever.

Peyton Manning is in attendance.. it’s been a good run

The only way to truly test the Peyton Manning Curse is for Peyton to come to a game in any sport where Tennessee is favored by like a million points/runs.

The Peyton Manning curse is real. KEEP HIM AWAY

Curse or not, they’re out. To make matters worse, their head coach could be headed to LSU. In fact, it’s very possible after his impressive turnaround of the program.

This is a strange way for Tony Vitello to answer the question of whether he’s had any communication with #LSU. pic.twitter.com/6pvCa8wEr8

Tough day to be a Vol and therefore a great day for the rest of the world.