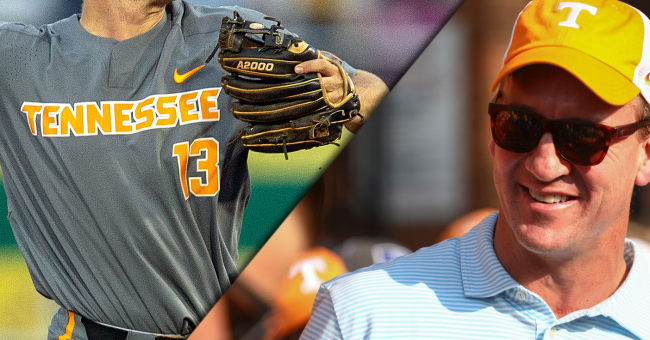 In case you haven’t been paying attention, the college baseball postseason has been in full swing for the past few weeks as teams strive to lock up a spot in the bracket at the College World Series in Omaha.

The action and drama has been at a fever pitch and for the first time in two years, there will actually be a College World Series.

And nowhere has it been more exciting than at the University of Tennessee where the Volunteers baseball team have moved on in dramatic fashion and will be playing the Virginia Cavaliers in the first round of the College World Series on Sunday.

Related: You Have Never Seen A Bat Flip More Vicious Than Tennessee’s Drew Gilbert After Hitting A Walk-Off Grand Slam

This will be the first time in 16 years that the Vols, who went 50-16 and swept LSU in the Knoxville Super Regional, will have gotten to play in Omaha, site of the College World Series.

Naturally, considering the combination of the University of Tennessee and the city of Omaha, the team reached out to legendary alum Peyton Manning to put together a funny congratulations video with head baseball coach Tony Vitello.

The Volunteers enter the tournament ranked #4 in the nation and will play either #2 ranked Texas (47-15) or either 8th ranked Mississippi State or 7th ranked Notre Dame if they can advance.

The College World Series begins on June 19 and runs through June 30 at TD Ameritrade Park Omaha in Omaha, Nebraska.

The first day of the Series will see NC State taking on 9th ranked Stanford at 2 p.m. ET, and then 5th ranked Arizona goes up against #4 Vanderbilt at 7 p.m. ET.

Tennessee and Virginia will play on June 20 at 2 p.m. ET, then #2 Texas takes on 7th ranked Mississippi State at 7 p.m.

All of the games at the College World Series will air on ESPN, ESPN2, ESPNU, ESPN+ and fuboTV.